The Great Concert Frederic Chopin by candlelight in Cornwall ! 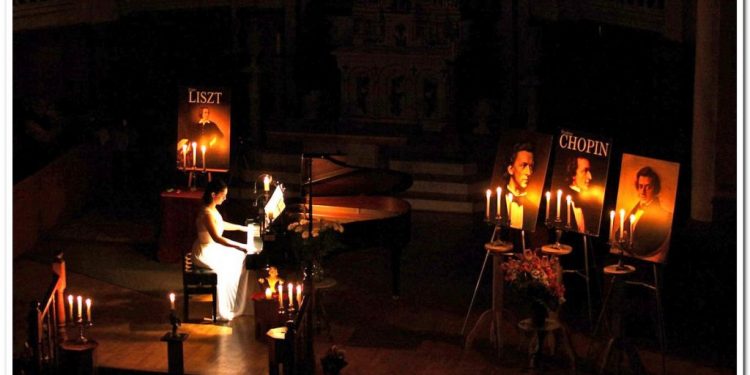 That evening, lovers of Great Music will attend a Concert so brilliant, stamped with sentiments of such stature and of a Beauty so overwhelming, of such Grandeur and of such Nobility, that only a moving souvenir will be able to remain in their souls, because that evening they will be witness to an Event … worthy to be immortalised in everyone’s memory!

You will discover Chopin and his Music in a new setting, as it has never before been performed.  Just imagine listening to one of his nocturnes sitting in a church illuminated only by candles, or his third Ballad, or his famous Funeral March !  Everything will be so spirited – the anecdotes, the scenery and the atmosphere – that you will have the impression that evening of attending a Concert … given by Frederic Chopin himself!

Each performance of the works on the program that evening will make you relive the moment of its first performance or of its composition.  In this way you will be transported to Paris, the place where the composer lived during the second part of his life, to share the emotions that he felt, both joyous and melancholy.

As for the music, that sublime Music -, Etudes, Waltzes, Nocturnes, Ballade, Polonaise – veritable balms for the human soul, they will sing their beauty with such eloquence, such sweetness and such charm that you will come to want to beg the sun not to come and disturb the sublime moonlight … the Genius of Frederic Chopin!

Alejandra, that pianist with the fingers of a fairy who can charm you with her immense talent, took her first piano lessons at the age of five. She did her pre-university studies at the Vincent-d’Indy School of Music and her university studies at the University of Montreal, obtaining a Master’s degree in interpretation with the professors Patrice Laré and Dang Thai Son. She then continued her studies at the prestigious Moscow Tchaïkovsky Conservatory.  Alejandra performed as a soloist in Alberta, Ontario and Québec, as well as in Chile, Russia and Algeria.  Starting in 2011, Alejandra performed in recital in 21 different cities with the ”Concerts sous les Chandelles” and she made an album entitled ‘Alejandra Cifuentes Diaz …sous les Chandelles’, which is heard regularly on Radio-Classique Montréal 99.5 FM.

An evening will send you – as if in a dream – into a nostalgia for Him who was … the Star of his time, Thanks to the enchantment of his most beautiful piano pieces!

Admission is $30 and tickets are available at Melody Music, 104 Pitt Street or at the door the evening of the concert.