by Editorial Board
in Columns
Reading Time: 2 mins read
53 0 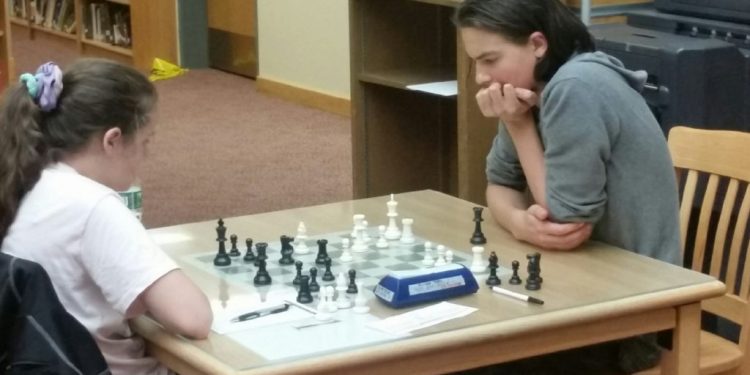 During round 5, Chateaugay’s Jacob Hetman works to find an advantage against his opponent, Montreal’s Allison Tsypin.

On Saturday, Malone once again played host for the Upstate NY Scholastic Chess Championships. Teams and players from throughout the north country competed for individual and team honors. Returning to the event was defending (individual play) champion, Allison Tsypin from College Charlamagne (Montreal). Tsypin has dominated the event in recent years with two straight championship titles. Returning to defend the team title was Massena.
During the second round of action, there was a shocking upset; Tsypin lost to Massena’s Myles LaFrance. With this loss, many players saw opportunity to dethrone Tsypin and replace her as champion. According to the event organizer, Matthew Rogers, this loss set the tone for the next two tumultuous rounds of competition as numerous upsets followed.
Said Rogers, “A few rounds later following round 4, incredibly there were six players tied for 2nd place with a record of three wins and a loss. Player ‘A’ would beat player ‘B’ but lose to player ‘C’ and so on. I believe that this served as a testament of the number of skilled players competing, there were no ‘easy matches.’”
Following the 4th round of play, the only remaining undefeated player was Chateaugay’s Jacob Hetman. This put Hetman on a collision course with a resurgent Tsypin in round 5. Tsypin battled hard, won the match, and in doing so, found herself in a four-way tie for first place with Jacob Hetman, Massena’s Jimmy Farbotnik, and Malone’s Miro Pant. A 6th round (head to head, winner take all format) proved necessary.
Following tiebreak criteria it was decided that in the event’s championship match, Tsypin would again face Jacob Hetman. Despite having lost early in the tournament’s 2nd round, Tsypin never lost her composure. She battled back, earning a spot in the championship match, and then once again defeated Hetman, winning her third straight Championship.
1st Allison Tsypin (College Charlamagne)
2nd Jacob Hetman (NCHS)
3rd Jimmy Farbotnik (Massena)
4th Miro Pant (Malone)
5th Ashton Keith (Malone)
On the team side of the event, Massena repeated as team champs with the collectively strong play of Jimmy Farbotnik, Myles LaFrance, Tyler Hargrave, Tyler Bacon, and Johnny Farbotnik. Finishing tied for 2nd was Malone and “North Country Home Schoolers.” Also participating was Potsdam, Salmon River, and College Charlamagne.
Up next is the Open Tournament on Saturday June 10th. The event, hosted here in Malone is open to the public, is free to enter, has divisions for all ages (including adult), and offers $1100 in cash prizes. Anyone interested in more information or preregistering for the event (required) is asked to contact event organizer Matthew Rogers at 518-353-6676 or email [email protected]