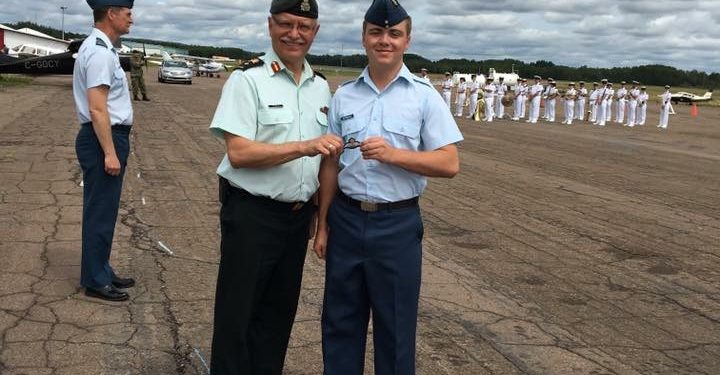 This past summer will be one never forgotten by FSgt Brendan McDonald, who earned his Glider Pilot Wings through the Royal Canadian Air Cadet program. FSgt McDonald, a member with 325 Cornwall Kiwanis Royal Canadian Air Cadet Squadron, here in Cornwall, was one of serval selected across the country to receive a scholarship and training through the Department of National Defense, all at no cost. McDonald had the opportunity to train at the Debert Cadet Flying Centre, in Nova Scotia.

Flying has been a life-long passion for FSgt McDonald. This passion is what brought him to the air cadet program, where he had the opportunity to learn some basic aviation training including subjects such as meteorology, aircraft structures and maintenance, engines and aviation law. His training through additional winter and summer training programs with cadets allowed him to advance this knowledge. All of these additional courses are provided as an optional addition to the air cadet program, with local programs run by aviation enthusiasts and volunteers from Cornwall and area.

McDonald has been studying hard the last few years. The application for a glider scholarship begins with an entry exam provided through Transport Canada. A minimum threshold must be met before a cadets may continue in the selection process which selects the cadets based on merit, cadet participation, qualifications, interviews and even school marks.

“My first solo was the highlight of my life and encourages me to keep pursuing a career in aviation. Everyone on the airfield deserved and worked hard to be there” said McDonald after being asked what his favourite part of the training was this past summer.  A solo is a flight in which no instructor is present in the aircraft.

A tradition for cadets who complete their first solo is either a dunking in a river or cold water poured over them, alongside their instructor. McDonald remembers this ritual fondly as he got to take a dunk in a river alongside the airfield with his instructor and several course mates.

The course is fast passed with classroom and air training Monday to Saturday for six weeks, with most days being 12 hour days. A lot of material and skills are learned over this time.

When asked more about his experience, McDonald replied “We had many opportunities this summer such as working with experts from every aspect of aviation, truly a pleasure to work with. We also had the chance to fly in a Sea King helicopter based off of Shearwater, I am pursuing a career to be a helicopter pilot myself and could not have been any happier.”

The graduation ceremony at the end of the course sees successful cadets receive their wings and licence from Transport Canada. At this summer’s graduation parade in Debert, a special guest was present to hand the well-earned wings to the cadet; Brigadier General Kelly Woiden. BGen Woiden is the commander for the newly minted formation from DND: National Cadets and Canadian Junior Rangers Support Group.

What’s next for McDonald? Just ask him and he’ll tell you “Next summer I want to do the power pilot scholarship and then off to post-secondary with the military. I don’t know where I’ll end up but I will for certain fly until I grow old”

For youth aged 12-18, with an interest in the military or aviation, the Cornwall air cadets parade Wednesday evenings from 6:15-9pm at the Cornwall Armoury. Training and uniforms are free. More information can be found at 325aircadets.com.

The squadron will soon be entering its 75th training year, having training thousands of local youth from Cornwall and surrounding area. The squadron is proudly sponsored by the Cornwall Kiwanis Club and Royal Canadian Air Force Association Wing 424.