Then and Now: The Victorian Order of Nurses

by Editorial Board
in History
Reading Time: 2 mins read
51 0 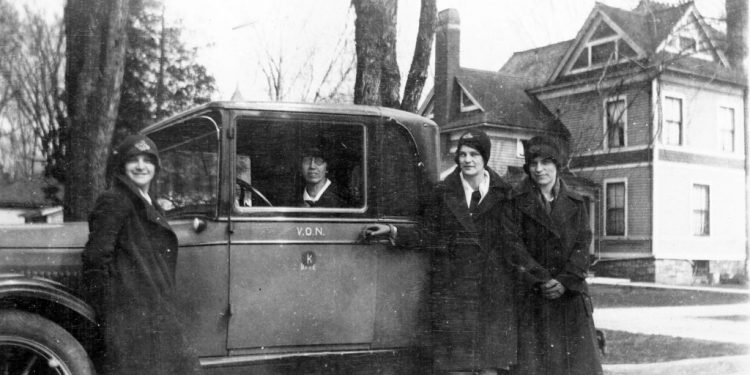 The V.O.N. was established in Cornwall in 1914, initially assisting with home deliveries, then shifting to home rehabilitation. The organization operated out of a series of locations, including 256 Pitt Street and 4 Second Street East, above the Bank of Nova Scotia.

Over time they made the switch to using automobiles in order to make their daily rounds. In the background of this 1930 photo is an historic former Cornwall home. It was constructed for the widow of John Sandfield Macdonald after the Premier’s death and known as “The Cottage.” The beautiful house sat on the northeast corner of Second Street East at Sydney and after her death was sold to Mrs. J.G. Snetsinger. In 1971 it was demolished while still seemingly in a good state of repair.

This photo was taken in front of the Capitol Theatre; Miss Mary Mack is second from the right. Mary Mack served the V.O.N. and several Cornwall agencies and organizations over the years. She was also Cornwall’s first female City Councillor. A small book detailing her life is anticipated for publication this autumn.

Some will recall the water fountain that the V.O.N. had installed on the grounds of Central Public School to commemorate the service of Bertha Moer, the City’s first school nurse. She died in February of 1917.