10 reasons to check out the Cornwall Nationals

by Editorial Board
in Sports
Reading Time: 5 mins read
51 3 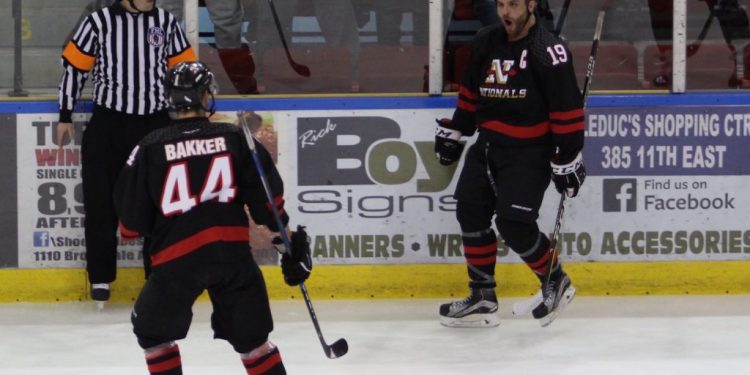 The Cornwall Nationals are the city’s professional hockey team, bringing tons of family entertainment to local fans. Haven’t checked out a game yet? Here are 10 reasons why you should get to a game and support local hockey:
(Photos courtesy of Creative Images) 10. Joel Trottier
Nationals head coach Joel Trottier hails from Alexandria, ON, and is fully committed to the team, which practices three times per week in Akwesasne. Trottier, 40, was drafted by the Boston Bruins in 1997 and went on to have a lengthy professional career that included stops in the AHL, ECHL, WCHL, LNAH, FHL as well as overseas in the Netherlands. He captained Cornwall in its inaugural season, scoring 28 points in 32 games before taking over as head coach a year ago. Trottier’s troops have responded to his style behind the bench.

9. Cameron Bakker
After four seasons with Liberty University, the Kenmore, ON, native has impressed Nationals fans since his arrival in Cornwall. Cameron Bakker collected three assists and was named the first star in Sunday’s victory over Danville. One of the most exciting defencemen in the FHL, Bakker is looking to create offence every time he is on the ice. He has 3 goals and 9 assists for 12 points in 11 games.

8. Great Value
Where else can you get three hours of entertainment on a Saturday night in Cornwall for less money? Individual game tickets are priced at $13 for adults, $10 for seniors and students and only $5 for children under the age of 12. A family of four can go watch a 90-minute movie for $36.50 or can come enjoy a Nationals hockey game for only $36. And it won’t cost you $20 for popcorn and a soft drink at the Civic Complex either!

7. Twin Towers
The Nationals have plenty of speed and skill and are complemented nicely by a pair of hulking forwards in Brandon Vuic and Antoine Guimond. Vuic is 6-foot-4, 215 lbs. while Guimond is 6-foot-5 and 215 lbs. While Vuic and Guimond will keep FHL opponent’s honest on the ice, did we mention they can also play? Vuic has 5 goals and 4 assists along with 25 penalty minutes in only 7 games, while Guimond has 2 goals and an assist along with 12 penalty minutes in 10 FHL contests.

6. Entertainment
The Nationals marketing team of Kris McCarthy and Shannon Ferguson have worked tirelessly to ensure the games are truly engaging spectacles. Every game this season is presented by a featured sponsor and gives back to a charitable organization. The in-game production makes the Civic Complex come alive with exciting promotions, intermission performances by the team’s official dance team from Beat Central Dance Company (BCDC), the Newlywed Game and Trivia during media breaks and entertainment all night long that keeps the crowd engaged and energized.

5. Goaltenders
Sébastien Dubé-Rochon has earned the starting role in goal for the Nationals and he hasn’t disappointed, providing consistent netminding for the Nationals in the high-scoring FHL. The 22-year-old played overseas in France last season and has been a revelation in the Cornwall crease this season. Tyler Beskorowany made his Nationals debut last Saturday and he’ll be sure to get a few more games in goal for Cornwall. The calm and cool Beskorowany was drafted by the Dallas Stars in 2008.

4. Speed
The FHL continues to evolve since its inaugural season in 2010-11. The biggest different? Speed. Is there a faster, more skilled player in the entire FHL than Maxime Guyon of the Nationals? The 5-foot-8, 165 lb. winger dazzles fans at the Civic Complex with his speed and agility. Guyon is among the league’s top scorers with 11 goals and 16 assists for 27 points in 11 games. He’s worth the price of admission alone.

3. Community
The Nationals developed their #NatsGiveBack campaign half way through their inaugural season and since then have given back to over 30 different charitable organizations. The team spent the entire off-season building relationships in the local community and helping out at almost every event that took place. The Nationals also began their Recycling Challenge in local elementary schools last year and are getting ready to launch it again this season after a great success. They presented their ‘It Can Wait’ Campaign at all local high schools at the beginning of this season, partnering with local police, fire and EMS services and local businesses to bring awareness to the dangers of texting and driving. The Nationals raise money at each each and every game for charities and hope that by supporting the community, that the community will also support them.

2. Captain
There are plenty of factors for the Nationals early-season success and at the top of the list is the arrival of Ahmed Mahfouz. The prized off-season acquisition was named team captain at his introductory press conference during the summer and ‘Fouz has not disappointed. The FHL’s all-time leading scorer and penalty minutes leader leads the league once again in points. Mahfouz has 9 goals and 19 assists for 28 points in 11 games. He has an incredible combination of grit and vision. The Captain never takes a shift off and will drill his opponent into the boards with a hard hit
one second, then set up a teammate with a perfect pass the next. Mahfouz plays the game the way it should be played and wins wherever he goes, which is great news for Nationals fans. He is a three-time FHL champion and is hungry to bring a Championship to Cornwall.

1. Winning
It was another successful weekend for the Nationals, who swept a weekend series with the defending FHL champion Danville Dashers. With 8-4 and 6-5 victories over Danville, the Nationals served noticed to the rest of the league that they are for real. Cornwall improved to 7-2-0-0-2 and sit first overall in the FHL standings. While there are no guarantees, odds are you’ll see the home team win this season. In seven regular-season home games, the Nationals have six victories at the Civic Complex. The only defeat was a wild shootout loss.

The first-place Cornwall Nationals currently have the second-lowest attendance rate in the Federal Hockey League, averaging 804 fans per game. Let’s work together as a community to increase those numbers and get more people in the seats, enjoying our professional team that is working so hard to revive the city’s hockey scene!

The team is also holding a Royals Night on Saturday, Jan. 13 to pay tribute to the much-loved Cornwall Royals. Players will wear replica jerseys which will be up for auction afterward with proceeds from the night going to Carefor Hospice Cornwall.