We have the arts – Now let’s build them a home! 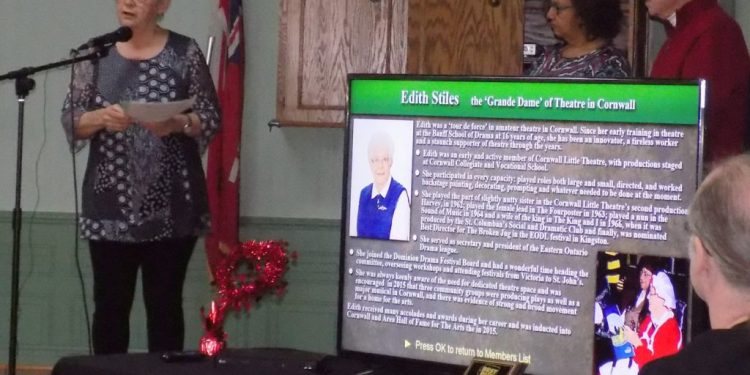 Cornwall, Ontario – This was the message that was given to over 100 supporters of the Arts in Cornwall and area, who were gathered at the Royal Canadian Legion this morning (Tuesday, February 13th) for the Heart for Art Breakfast II, which was hosted as a fundraiser by the Centre for the Arts Collective.

This event saw the launch of the new Cornwall and Area Hall of Fame for the Arts, a digital Hall of Fame on whose virtual walls the leaders and “Champions of the Arts” will be recognized and celebrated.

This Hall of Fame for the Arts will have a permanent home at the Benson Centre but will also be mobile so that it can be moved to different arts events throughout the years. This is easy to use and will be shown on a 55″ TV that has been donated by Best Buy.

The first 5 members of the Hall of Fame were inducted in 2015 and 2016 and their information is accessible on this new program designed by Sheldon Grant of 3D Creations. These members are Andy Trasuk, Edith Stiles, Ron Sullivan, Lionel Tessier and Tom Thompson.

As well as the launch of the Cornwall and Area Hall of Fame for the Arts which was explained by John McMartin and Rose Desnoyers (of the Centre for the Arts Collective)  and the new Website for the same, there were many speeches including Guy Lauzon MP, Linda Geisel, President Focus Art, Danielle Vaillancourt, Chair of YAC, Mayor Leslie O’Shaughnessy as well as Bernadette Clement, Cornwall City Councillor and supporter of the Arts in Cornwall.

Mayor O’Shaughnessy stated that the present council has recognized the need for the Centre for the Arts and is moving forward on this.

There were many City Councilors in attendance who took part in the Raffle for pieces of Art and after many of them won, Councilor David Murphy stated, smiling, “This shows that we support the arts!”

Everyone who has so far made donations to the new Centre for the Arts was thanked and the Seeker is happy to have been one of the first to donate a cheque for $2,500 from one of our Awards Nights.

Of course there was a special guest who sat quietly in the corner of the stage and came out at the end in one of her glamorous costumes with paintbrushes in hand, stating about artists, “We do what we do because we were born this way!” The special guest was of course Joa (actress Joanne Gamelin) who also said “Art is what keeps the Heart of Cornwall going”.

Seen here are members of the Centre for the Arts Collective with special guest Joa, wearing her handmade “Arts Hall of Fame” costume.