Friday night light’s out for Cornwall

by Editorial Board
in Sports
Reading Time: 2 mins read
26 2 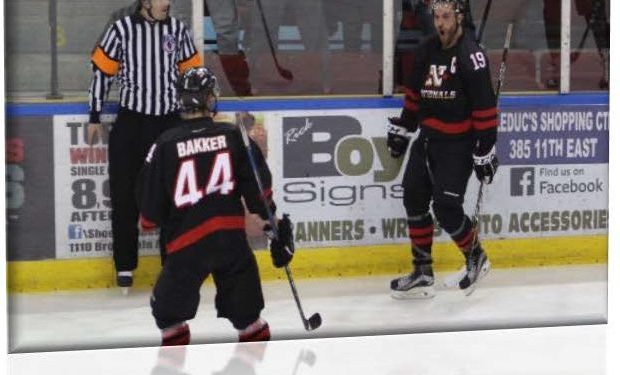 CORNWALL – The Nationals were completely outclassed by the first-place Port Huron Prowlers on Friday night at the Civic Complex.

The Prowlers skated to their ninth straight Federal Hockey League victory, 11-1 over Cornwall in front of 507 fans.

Port Huron opened the scoring 2:06 into the contest when Yianni Liarakos’ wrist shot from the slot beat Sebastien Dube-Rochon. Josh Colten then riffled a shot past Dube-Rochon at 5:04 of the first for a powerplay marker.

Branden Parkhouse connected on a perfect feed from Matt Robertson at 7:22 of the first to give the Prowlers a 3-0 lead.

The Nationals got on the scoreboard when the newly acquired Matyas Kasek beat Port Huron’s Michael Santaguida for a buzzer beater with 0.1 seconds on the clock.

Parkhouse then redirected in a pretty feed from Robertson at 7:12 of the middle frame to give the Prowlers a 4-1 lead.

Matt Graham tapped in a Stepan Timofeyev pass to beat a helpless Dube-Rochon with 5:32 to play in the second before Liarakos gave Port Huron a 6-1 lead with 4:19 to go in the frame.

Brandon Billie took over goaltending duties for the Nationals in the third period and Timofeyev beat him at 5:57 of the period. Robertson and Parkhouse then connected 17 seconds apart as the Prowlers opened up a 9-1 lead.

Timofeyev added his second of the night with 8:09 to go of the third before Austin Daae rounded out the scoring with 6:09 to go.

Cornwall is back in action on Saturday night at the Civic Complex when they face the last-place North Shore Knights. The puck drops at 7:30 p.m.

Deep into it: The Vagina monologues move, anger and humble