Cornwall, ON – Each year the Seeker is invited to attend the Cornwall Motor Speedway Annual Stock Car Awards Banquet & Dinner held at the Stormont Community Hall in Long Sault and it is always an honour for me to attend and be in a packed room of racers celebrating their wins during the previous racing season.

I’m not sure how many know but many, many years ago I spent a lot of time at the Cornwall Speedway when we owned a Semi-Pro and then a Modified, so for me to celebrate with so many names I have heard over the years as well as hearing all the new names is quite exciting. 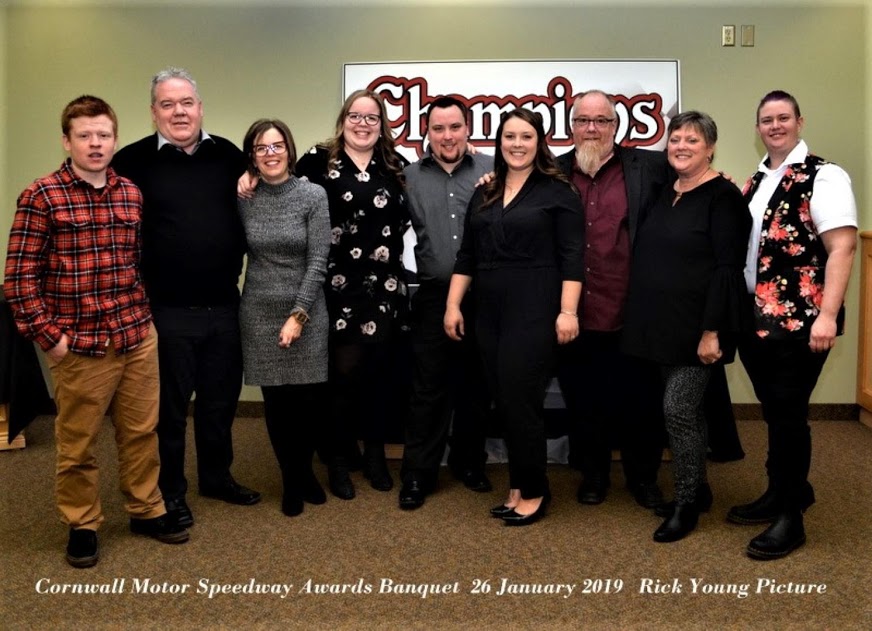 This year was even more special as the Cornwall Motor Speedway is celebrating 50 years – being owned previously by Ron Morin (who was in attendance) and now by the present owners, the Lavergne Family (also in attendance and seen in photo right) and who are amazing to work with.

As always we were treated to a wonderful meal, a run down of the events coming up for the 2019 racing season and then the awards of the trophies and the prizes began. As you can see in the photo above there certainly was a lot to give out and the Seeker congratulates all the winners but would especially like to mention the following: 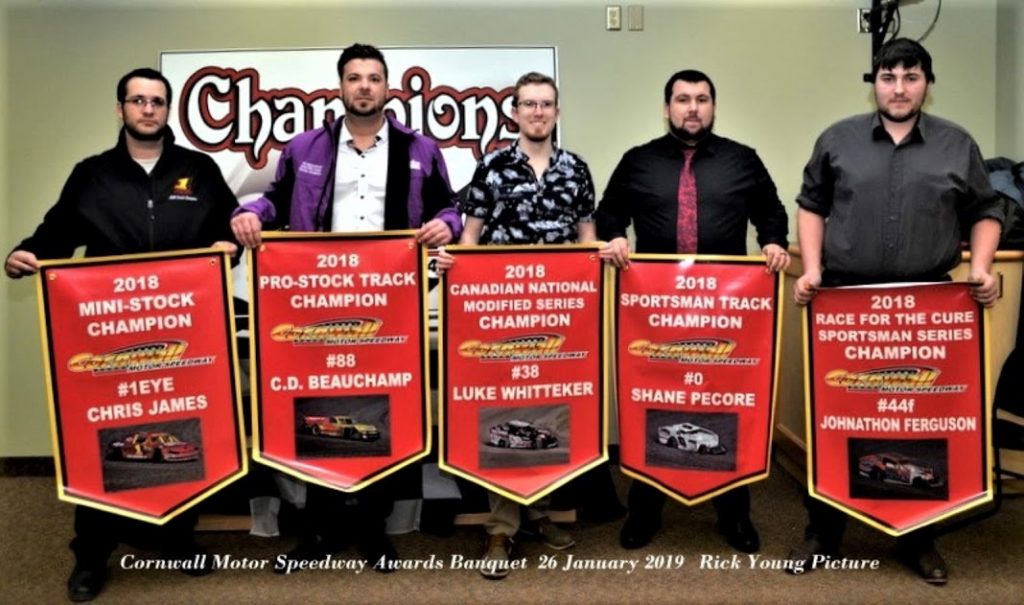 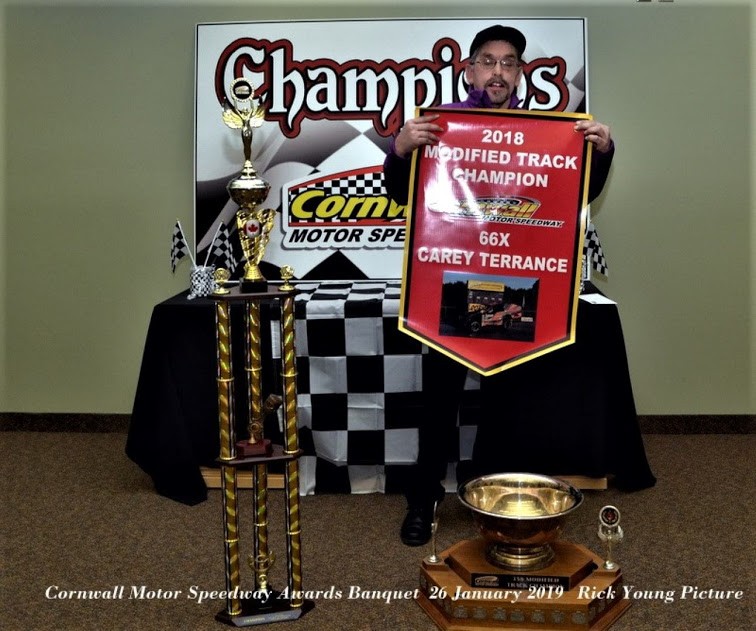 – Carey Terrence (Modified). Terry wasn’t in attendance so his award was picked up by his number one fan Chris Hearne “crew chief” (left) 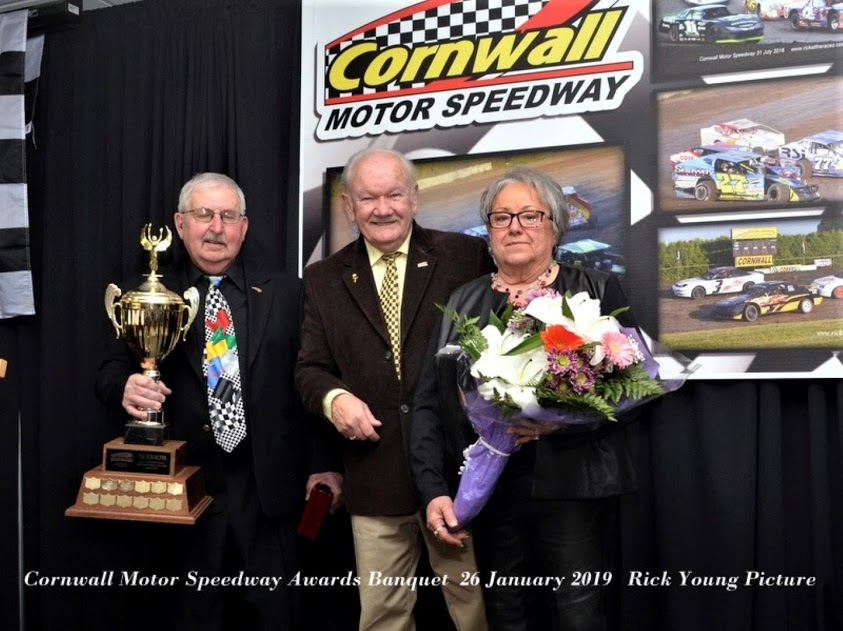 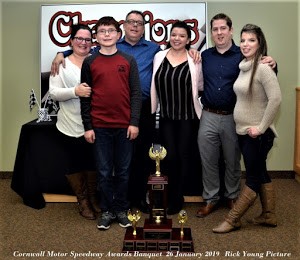 SPECIAL BANNERS
were presented to C.D. Beauchamp and Shane Pecore in recognition of their big wins (as reps for Cornwall) in the October’s SUPER DIRT WEEK at Oswego NY.

The evening concluded with music and dancing and we look forward to Sunday, May 19th and the Season Opener – the Canadian Nationals Series / Race for the Cure Series. For more information about the Cornwall Motor Speedway visit www.cornwallspeedway.com

I was also invited to attend the VIP opening of Fairy Sweet’s new downtown location so off we drove to 11 2nd Street West in Cornwall where we could see a pink glow through the door, heard the music of the DJ inside and were greeted by a crowd of well-wishers congratulating Fairy Sweet owners Sue-Anne and her mother Sue. (photo below left) 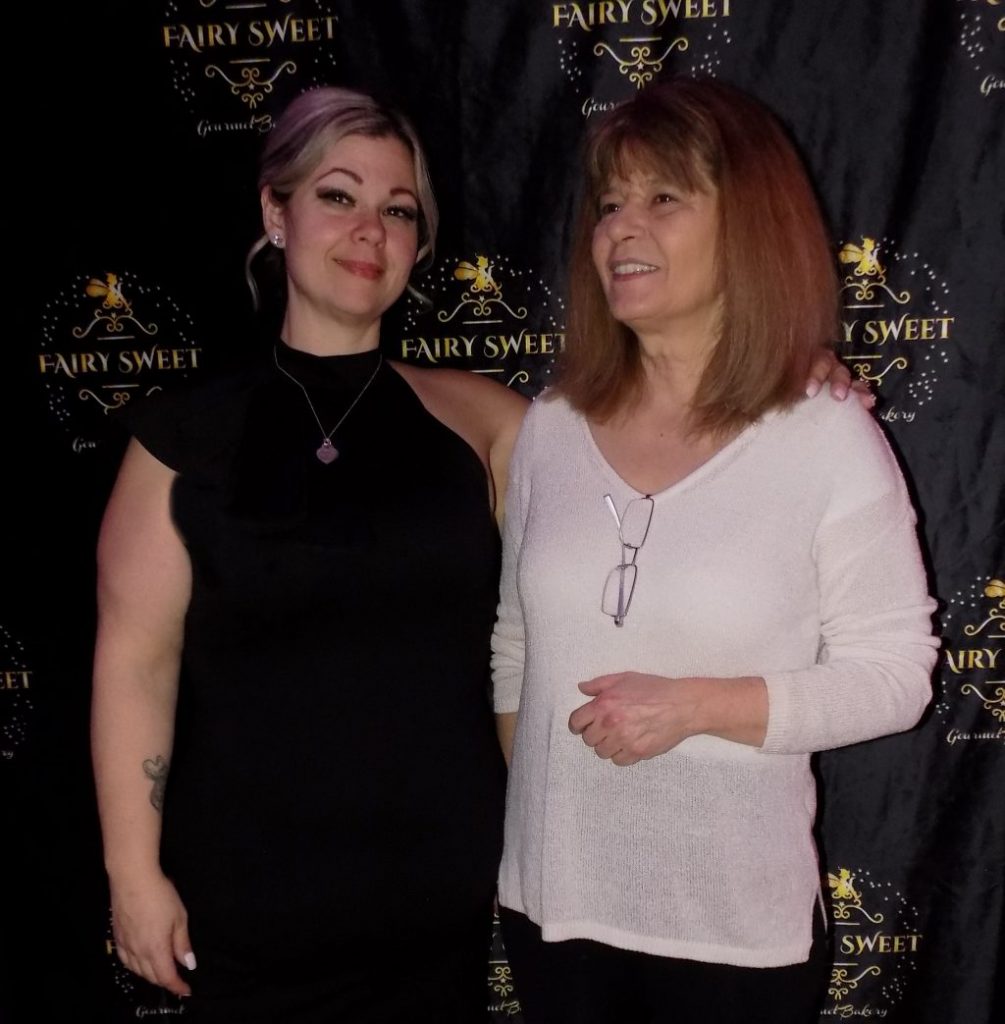 In 2018 the Downtown Business Improvement Area sponsored a contest called “WIN THIS SPACE” which the owners of Fairy Sweet entered and were the proud winners of. Win This Space provides Fairy Sweet with $1,000 a month for an entire year to cover lease costs. The bakery (which most of us know and love) will now have a storefront to show off their wonderful cakes, desserts and chocolates. 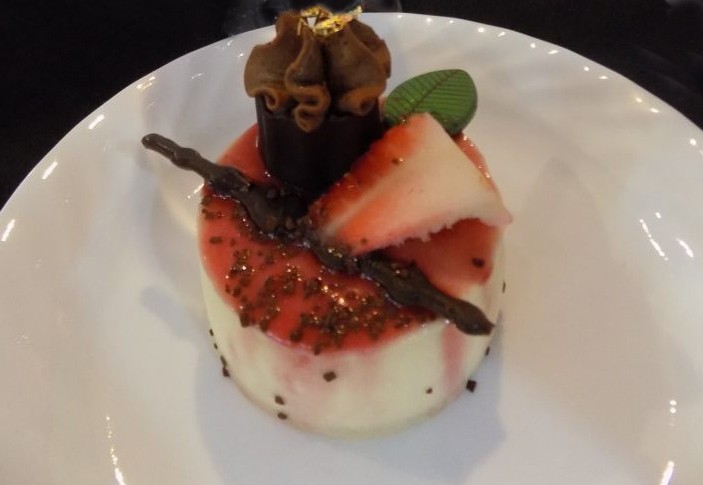 For any of you who attended the Seeker’s Choice Awards last June, I’m sure you will remember the beautiful dessert that was supplied by Fairy Sweet.

coming Thursday, January 31st at 11 2nd Street West from 10am to 4pm and when you are there make sure you check out “The Fairy Door”! Visit them as well on Facebook at: www.facebook.com/fairysweetchocolate/