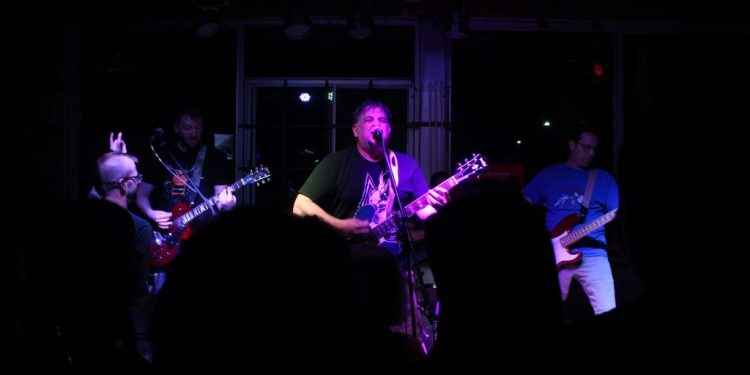 The Everlongs gave a passionate performance before a packed crowd at Lola’s last weekend.

Saturday, June 8 – it’s humid, the crowd is elbow to elbow packed, and going wild as a thumping bass line shakes the ground.

The Human Carnival are halfway through their debut set and are in fine form. Head banging and thrashing around the stage. It’s an electrifying, memorable performance.

And tucked away in the hallway entrance of Lola’s Pub and Grub witnessing all of this are sisters, Chantal Amyotte and Amy Crowe.

Reserved yet friendly, the two women sit behind a small table of bracelets and mints and are an odd sight to see amongst the punk rockers, metal heads and grit grinders that crowd the bar. Yet they show no hesitation as they affably greet people at the door, asking for donations.

Their cause: the Canadian Mental Health Association.

Their reason: because a year ago they lost their brother, Steve, to suicide.

Since then the two have made it their mandate to make sure their brother’s death was not in vain, and have gone on to raise over four thousand dollars for the CMHA – three thousand more than their original goal.

Hearing the sisters were doing this, Everlongs front man, Tommy Heatley stepped up and offered to help put on a charity show for their cause. And man did he ever deliver on the lineup.

Jumping around the stage, flipping off the cameraman (I have feelings!), and delivering a note for note authentic A Day To Remember performance that blows you away, this band is tremendous.

And man can they get a mosh pit going like it’s no one’s business.

If the Sex Pistols and Fugazi had a love child, it would be these guys.

A heavy dose of rock, rage, and angst this three piece is all kinds of awesome.

The rhythm section is made up of drummer, Shane Levac, and bassist, Dane Dallinger. Together, the duo pack a sonic punch that wallops you in the face. It’s precise, calm, yet powerful and unreal to hear live.

On vocals and lead guitar is the humble yet charismatic, Braunson Lalonde. If there was admission he’d have been worth the price alone. Each song is an emotional ride for Braunson who leaves it all out there, swinging his guitar, banging his head, and singing his heart out.

Their songs were out of this world, their riffs were killer, and their performance was ‘you had to be there’ worthy.

These guys are the next local act on the rise.

Last up, The Everlongs (Foo Fighters tribute) – front man, Tommy Heatley, is Dave Grohl’s spirit animal. The passion, the energy, the vocal growl. It’s fantastic, and throw in the wild flailing arms of drummer Rob Upper and the rich tones of Nick Kalil’s bass playing and you have yourself one hell of a live show.

All in all it was a great night for a great cause.

Concerts like this are important and show what makes the Cornwall scene so great; it’s not just about the music, it’s about the community.

To help Amy and Chantal with their cause reach out to them here.