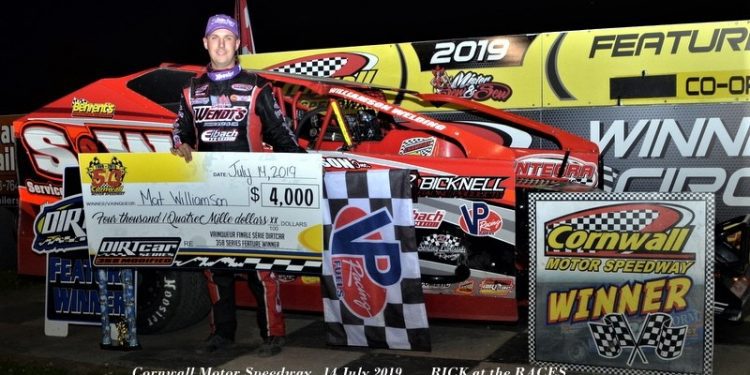 Cornwall, Ont. – One of the biggest events of the season was in town tonight with the DIRTcar 358-Modified Series along with a complete race program in all other division on a night sponsored by Co-Op Embrun.

Steve Bernard was the early leader in the DIRTcar 358-Modified Series Co-Op Embrun 100 in front of Mat Williamson and Luke Whitteker. The top lane was the way to go early on for the leaders as Williamson was on the tail of the leader. The leaders were in heavy traffic by lap 10. Top 2 drivers battled for the lead as Williamson took the lead on lap 18. First caution came on lap 27 for Dany Gagné. On the restart, Williamson was in front with Bernard in second as Mahaney was in his tire tracks, Mahaney moved to second on lap 38. Carey Terrance who started 8th moved to third using the top lane. The leaders were back with slower cars as the feature got to halfway point. Williamson regained a sizeable lead over Mahaney as Tim Fuller was now running third by lap 65. Mahaney got closer to the leader with 80 laps to go as Yan Bussiere cracked the top 5. Mahaney was getting closer to Williamson as the yellow lights came with 1 lap to go. The green-white-checker saw Williamson completing his work and getting the win over Mahaney and Fuller.

In the 25-lap Next Level Home Improvement, Ryan Stabler took the lead over Bob Ray and Thomas Cook with Robert Delormier in the mix with the leaders with the first 5 laps completed. Stabler was in the lead with Cook and Ray running side by side for second with Delormier right with them. Ray used the top lane and took the lead on lap 10. The first yellow came on lap 15. On the following green, Stabler got back to the lead as Cook moved to second with Ray in third. Stabler pulled away from the field and got his first win of the season.

Marc Lalonde led the first 11 laps of the Alexandria Home Hardware Pro-Stock feature as Dave Seguin used the inside of the speedway to pass Lalonde for the lead and led the final portion to get his first feature of the year.

The Tracy Wheeler Assist2Sell 15-lap Mini-Stock was the first feature of the evening as James Clarke led the first lap with Justin Jodoin in second as Marc Dagenais moved up to third. Caution was out on lap 4 for Brandon MacMillan. On the restart, Justin Jodoin took the lead in front of Clarke. This was the key to Jodoin who went on to win his third feature of the year.

The Patriot Sprints are in town next week along with the 2nd leg of the Race for the Cure Sportsman Series as the Modifieds will have a night off.