by Lisa Gray
in Locals in the Loupe
Reading Time: 4 mins read
48 2 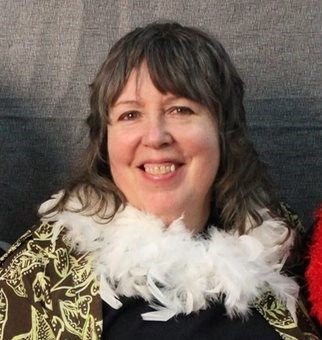 “I met Louise Mignault through a Writing project with Lorna Foreman, and the artists at 125 Pitt Street Studios. The writers anonymously chose a painting and wrote our interpretation. The Cornwall Public Library,then showcased our talents by hosting an event. The painting I ‘chose’ was created by Louise of a ballerina on the stage, who took her light & colors from the red sumac to her left and the hound dogs’ curling smile, to her right.”

It may have been Liza Minelli who said “Don’t listen to anyone who doesn’t know how to dream”, yet in any given life the world’s a stage with curtains drawn to Act 1. Born on the west side of Montréal, Louise Mignault used her own set of rules to understand the world. Her parents Robert and Cecile were both creative and down to earth people. Cecile had a laugh that could bring down the house. Her ability to attract the absurd in people, places and things was legendary while Robert’s philosophy on life and its influence on the parts we play, helped Louise create her own style for living.

Louise’s maternal grandmother Katherine, was ahead of her time, living a good life as a teacher and confidante. She and Louise had a privileged relationship with deep roots where a single memory today, can set a heart to flutter and water the eye, for the gentle touch that calmed an anxious mind to slumber.

In her junior years, Louise felt ugly compared to the models of the day. Hoping to change this, she haunted the make-up counters at Eaton’s & Simpsons and watched the sales girls apply their make-up. Louise became passionate about altering her appearance and experimented relentlessly with a modest supply of makeup purchased at Woolworths. Tall for her age, Louise wasn’t afraid of taking chances and once wore an orange striped Beatles suit to school. Cool or otherwise, one can only imagine where that suit is today.

When she graduated high school, Louise’s mother suggested she volunteer her talents at The Lakeshore Players Theatre, in Dorval, Québec. A young woman’s dreams became real when Louise was taken under the wing of Irene Inglis, whose influence as a makeup artist began on the 1940’s stage. Working together on two or three productions, Irene saw brilliance in her ingénue and generously stepped back, encouraging Louise to follow her passion and throw herself into the craft.

After working for several amateur theater groups, Louise was hired for a few days work, doing makeup for commercials at CFCF 12 and within two years had made contacts in the wider audience of TV and film production. Moving from one offer to another, Louise chose jobs that stimulated her creativity and stretched her imagination.

Thus began Louise’s thirty-year career as a professional makeup artist, working in over 80 films. In places like Pangnirtung, Nunavut, it was so cold that your fingers nearly froze between takes, and in Tahiti it was so hot that the makeup literally slid off your body. In a bit of trivia, Louise was the key makeup artist for the 1980 film, My Bloody Valentine., which had such a high Gore Rating, that the sensors waited 30 years before releasing the entire unedited picture.

If you asked what Louise’s biggest idiosyncrasy was, you’d have to watch Diane Keaton’s performance in ‘Annie Hall’. Somehow along the way, Diane Keaton becomes Annie Hall and Louise Mignault becomes Diane Keaton, whose comic nervousness makes her so lovable. She’s bright and quick – a real easy laugher – a complex paradox of self-doubt and assurance. Sharing the same Earth sign, both Louise & Diane are down to earth, stable influencers whose constancy never alters.

In 2011 Louise moved to Cornwall and put down roots within the strong artistic community of our city. She currently works out of 125 Pitt Street Studios and within this space, found her highly inventive – spunky – beautiful self in acrylics, oils and the Batik style of painting.

On the south west corner of Ethiopia is the Lower Omo River, which has been home to the Omo people for centuries. Embracing a rich oral tradition, the Omo preserve and transmit their history and moral stories, based on the healing powers of women through touch, teaching their children to become social, moral and healthy members of the tribe.

In her Batik work, Louise created two broad canvasses of juvenile Omo warriors adorned in ornate stripes and swirls of white chalk and ash. Their eyes pierce through the canvas across the years to the small girl sitting on her grandmother’s lap, whose gentle touch could still the energy twirling to get out. Like the ballerina in the white room taking her colors and energy from the paintings around her, the Omo healers and the artist within draw illness out with a soothing touch from a century’s old wisdom of spiritual comfort and sacred relationships.