Here Are 7 Things Only True Football Fans Will Understand

by Allen Brown
in You May Also Like
Reading Time: 4 mins read
167 2 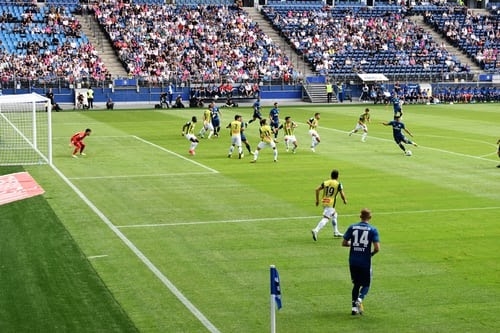 Being a true football fan is not only about memorizing all the players’ names or their unique achievements. It’s about knowing what brings them all together, motivates them to become winners, and gives them a push to keep going. Football is definitely a game that brings people together and makes them closer. So close to the extent that there are a few things that nobody will understand except football fans.

Here are 7 unspoken rules that only true football enthusiasts will relate to.

1. Keeping up with the Rumors and Team Updates

It’s not easy to stay up to date with all the news, match schedules, and leagues, but there are online platforms and websites that allow you to keep up with these things very easily instead of having to check every official club or team’s website. The football fanatics at ronaldo.com recommend looking for a reliable website that is dedicated to football to keep up with every game and player, no matter where they are in the world, and learn about any relevant updates or news the minute they happen. As a hardcore football fan, you have to know everything about your team players, starting from their workout routine and diet to how they got into football in the first place.

2. Being Superstitious Is Not an Option

If you’re a true fan, you are a true believer. You can’t just bail on things like watching the game at a specific place every match, sitting on the same seat every game, or wearing the same shirt every time your team plays. True fans take these things very seriously, so make sure you follow them every time you watch the game with the rest of the fans. If your team loses a game while you’re wearing their shirt, you can’t wash it until the next game so you don’t bring them bad luck.

3. Supporting Your Team No Matter What

A true football fan is one who has fallen in too deeply for their team. You have to justify your loyalty as a fan every time you meet other true fans. You have to be able to support them through thick and thin, whether they are winning or losing. Always find an excuse for them, don’t be scared to shame and blame all the referees in the world. Your team is always doing the right thing and working as hard as they can. If you don’t support them during tough times, who will?

Being a real football fan doesn’t mean just watching all your local or national team’s matches, you have to keep up with the sport internationally. Supporting your local team means sharing their vision. Every player’s dream is to play with the winning team in the next Fifa World Cup tournament, and you should keep up with other teams to be able to assess your own team’s performance. Streaming matches in foreign countries is the key to enjoying this sport.

5. Cheering Is Always Part of the Process

Mohamed Salah was once asked about the one thing that keeps him from losing his energy and passion during a match and his answer was simple and quick: the fans cheering. In football, the audience is responsible for the momentum built during a match. If there aren’t fans cheering in the field, the team players will most likely lose motivation and their pace would gradually decrease. Even if you’re watching the game at home, if you don’t lose your voice after a match, then you’re not doing it right!

6. Eating Your Way Through Half-time

The best thing about being a football fan is that every time there’s a game on, you get yourself a cheat meal or, actually, a cheat snack. Half-time snacks are vital for fans to enjoy this game, you have to prepare them or plan for them ahead of the game so you don’t waste time going back and forth to the kitchen if you’re watching at home, or for refills at the stadium. Don’t let anything, not even your strict diet, ruin game snacks for you.

Though it might seem like an exaggeration, some people wouldn’t mind losing their parents for their favorite team. If you are a real fan, this sport takes priority over work meetings, emails, texts, or even romantic dates. Football comes first, you have to make sure you do not miss the game, and if you have to, then you still keep up with the score.

Football fans always look like crazy people with their painted faces, silly hats, and every kind of whistle ever invented. However, it has been proven that being a sports fan can be very beneficial for your morale. Sports fans are generally less aggressive, they find it easier to make new friends and typically have higher self-esteem. They have weird habits and superstitions,  but they always seem to be having the best time of their lives while watching the game. Isn’t that the best thing a hobby can give you?

What is Lash Lift and Tint, and why you should consider them?