by Lisa Gray
in Locals in the Loupe
Reading Time: 4 mins read
53 3 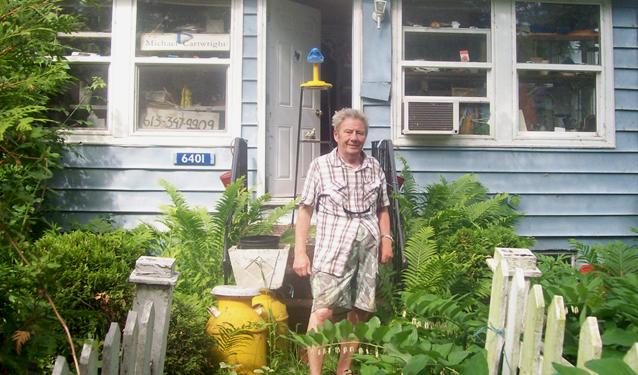 “I met Michael Cartwright through an artistic collaboration between the Writers Group & Cailuan Gallery. Michael’s interpretation of the dragonfly against the window screen was symbolic because like the dragonfly, we are all born into one form and slowly, through time – we transform into another“.

The Morgan Arboretum, located in Sainte-Anne-de-Bellevue, is a 610 acre forest reserve that hosts Montreal’s largest grouping of Canadian trees. Within this measure of land, live 180 species of birds. In the 75 years since its inception, the Arboretum hosts 25 km of walking trails for those who love their green space. Academics, recreationists, and photographers alike have held its esteem, as the heart of all that is good in the world.

Michael Elvin Cartwright, grew up not 2 kms from this forest. From the time he could walk, Michael was fascinated by the woods. It called to him. He was the boy-scout who raised racoons, with an ear cocked for birdsong. From their call, high up in the trees, Michael learned much about constancy and the call of the wild. The experience infused every aspect of Michael’s life.

At the age of 27, Michael attended the Nova Scotia College of Fine Arts & Design where he acquired an Associates Degree in Fine Arts. He also earned an ornithology credit at Acadia University in Wolfville, Nova Scotia.In between semesters, Michael worked as a seaman on the Canadian Survey ship; the Hudson. Stationed at the Bedford Institute of Oceanography, in Dartmouth, Nova Scotia, the Hudson was the first of its kind in Canada, built specifically for hydrographic and oceanographic survey work.

Upon his graduation, Michael put his camera to use, by photographing the fishing boats that docked in the Halifax harbor. One of Michael’s first boat portraits was from an old black & white photograph of the King’s Head Hotel, in England.

In the law of simultaneous colors, Michael’s brush linked the repetitive effort of painting the waters, in over 40 commissions. Two decades crested easy in the pitch of new found families, and the shrilling waves of the east Atlantic. http://cairnview.blogspot.com/

The gift of noticing the inexplicable nature of everyday things was born of Michael’s childhood trips to Prince Albert, Saskatchewan. Visiting his aunt & uncle at their summer cottage helped Michael shift his focus to the lighter side of life. Affectionately known as the Lake Years, Michael’s paintings of secluded summer spots with cottagers and sparkling waters are a stunning portrait of Canada’s natural world, and the brilliance of its moments.

For nearly 40 years, Michael’s father Roy, was a pilot for Air Canada, before retiring to a very successful Hereford cattle breeding business in Vankleek Hill. Michael’s mother, Margaret was a registered practical nurse. In the 90’sMichael worked on the farm and was struck by the number of times the cattlemen went to his mother – as opposed to his father – for information about breeders, pedigrees and the cycling dates of the herd. Margaret may have had a sweet tooth for angel food cake, but she was all business when it counted.

During a visit to a friend in South Lancaster, Michael learned about a small cottage up for sale, and in no time, had snapped it up for a song.

When Roy passed away in 2003, Michael found – quite by accident – his father’s flight book from his years with the R.C.A.F., and in Burma during WW2. On that day, Michael learned that his father flew the 1stTrans-Canadian flight across Canada, on June 1st, 1957. To Roy, it was just another day on the job. He flew home the next morning to flashbulbs crackling, his name in the papers, and an interview with the CBC. Imagine how it felt to hear your father’s voice on radio archives, everlasting in history?

In 2012 Michael survived a stroke, and recovered at the post-stroke rehab program, located at the Hôpital Glengarry Memorial Hospital, in Alexandria. He read the book ‘My Stroke of Insight’, by Jill Bolte Taylor, and began living a life of purpose. As a way of thanking his many friends for saving his life, Michael donated three of his works to the hospital as inspiration to other stroke survivors.

The most striking, is a three color separation print of an old photograph of his uncle’s cottage on Lake of the Woods, which Michael named The Bather.

Most proud of the hundreds of paintings, gracing the living rooms of everyday Canadians, Michael is a firm believer that art is fun. His creation of the one and only Blue Nose has graced more fridges than any furniture store, in all ten provinces. Michael’s art remains as pure in spirit, as stones cast upon the water, ripple endlessly in hues of land and sky.

Improving the Quality of Your Work Conditions During a Pandemic