by Mai-Liis Renaud
in Locals in the Loupe
Reading Time: 11 mins read
43 3 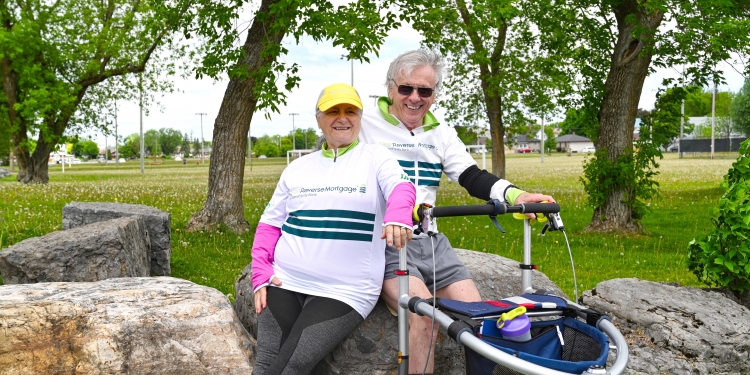 Many Questions with Maestro Robert William, Bob Hardy, the Walker-Runner.

Article by Mai-Liis Renaud with Bob interviewing himself!

I was very fortunate to have tracked down the individual who will be introduced to you in this article and who also graces, along with his lovely wife Vickie, this month’s front cover of the June Seeker.

The person who I am talking about is Bob Hardy – a feisty 70 year old bloke from the country where I am from, England. The first time I met Bob was at a Cornwall Chamber of Commerce’s Pub Nite (that we used to have before the Pandemic of course.) and we had a great conversation reminiscing about humour that only British people would understand.

June is Senior’s month and there are many Seniors who I admire (my Mum and Dad of course being number 1 on my list) but here is a man that truly motivates me. He has had many medical setbacks but instead of complaining, uses them as a stepping stone to his next adventure. Bob, I think, runs on Duracell Batteries as yes he gets “knackered” but then has a nap and sets of running again … and I mean running because many years ago he was training for one of his Marathons with his walker here at the Civic Complex and I couldn’t even keep up with him doing rounds of the walking area. (See pic above) and the reason why I had Bob conduct his own interview was because he has a certain style of humour and I certainly couldn’t have come up with questions to ask this man who has done so much over the past 70 years. So here goes …Enjoy getting to know Bob Hardy…

Re-use and re-cycle. Use my body for science, if I can. I have signed the paper work. There’s probably a few good bits left. Cremate the rest, put it in a pot and stand it on the mantlepiece to annoy my family Finally. a going away party. First. Thank the tax payers of Canada for paying for all my procedures. Finally. My pre-arranged “Meaning of Life Celebration”.

And what happened in the beginning?

Had a terrible time. Born the son of a coal miner. Sounds like a song.

My dad was trapped on the coal face around the time I was born. For the first few years I was a nervous wreck and scared of my own shadow.

Born in poverty, which was good for me. I learned to Overcome Obstacles.

During WW2 my dad was at Coventry the morning after the fire bombing He was tossing the charred bits (bodies) into totes. Cleaning up. The event disturbed him for the rest of his life.

We moved a lot. About every two months. Mostly lived in the country without a car. Learned to walk, run and bike at an early age. Slowly developing into the Walker Runner.

Obstacles. Being bullied in the early years. Then I learned to fight back and never stopped.

Biggest obstacle. Being evicted from our house. Sitting on the grass with all our belongings around us. We did find temporary acommodation.The cause? My dad’s post war problems

Where did I acquire my self esteem and craziness. HIGH School. How?

Formed my own band at age 14. Sobranie Sound. At 17 most of my income was music income. All high paying gigs. My day job was apprentice motor mechanic. Had expensive books to pay for and support my mum and dad.

What was my worst time at High School? Living at Seven Barrows, near Lambourn. Another crazy move by my dad.

Getting to school – A seven mile bicycle ride to Lambourn followed by a 14 mile bus ride to Newbury and a 2 mile run up the hill to finish. When I got there all the sports training and other stuff. Basic training for my 2019 100-km walker race

Best memory at High School My surname is Hardy, which in a naval family, like mine, can be a curse. At all sports arenas during my events my friends would shout “Go kiss Me. go” The kiss me came from Battle Of Trafalgar and Nelson.

1965. Rugby. High School versus the Grammar school snobs. My winning try in front of all the young ladies from both Grammar school and high school. Not that we could socialise. The big annual outing for all Newbury schools.

My winning try. I found some space on the right side and dodged through many tackles heading toward the right upright and dived while being tackled by a prop forward (big guy). My head cracked on the post. No padding in those days. The rest was a blurr until I came round to the sound of Mr. Eggbeer, my coach. Bloody good job Hardy. KISS ME.

High School made me what I am today. Feeling lucky to be alive. Trained inovercoming obstacles and achieving goals. Don’t expect it to be easy. It wasn’t. I often told myself and still have to: Stop the whining, get off your arse and get on with life.

How successful was my music career? Very, but I didn’t make a fortune yet.

In 1968 I left home to move to London with my tenor saxophone, which I had swapped for my clarinet. Had two pounds in my pocket, found some basic accommodation and temporary job to buy some food. Found a band, played some gigs and quickly got a passport.

1970. Tour of Italy with Paul and Paula show band

Toured with Sutch for the rest of 1972

1973. Moved away from Rock Played Ballrooms with bigger bands.

1980 moved to Canada to develop an animated film project which did not work out.

Stopped to have kids succeed in a second career and then get stopped by health.

ISC awards 2016 and 2020. Asterial Plane and Anger. I wrote Anger during my fight with leukemia. Won the battle and a music award.

Participation Music Hall Productions 2013-2016. Lots of fun but too much for the old guy. Had problems with dexterity after the blood clots in 2012.

2020 COVID obstacle. To safe distance I reduced size of orchestra to 11 pieces. The sound works for me. Completed seven of the original Fifth Day themes and wrote a new work. Clockwork Mouses. Science friction. Parts 1 and 2 finished. Part 3 well underway.

1996. Leukemia and bone marrow transplant with lots of complications

2012. Blood clots and 3 months in hospital. One on the intestine and one on the neck. Lost my balance. No more biking.

2016. Cancerous tumors on my kidneys. Keeping an eye on them.

2021 sciatica almost stopped my walker racing. Cure seems to be Oriental Medical Care and stretching. Have a problem with a flappy left foot for now. Should have it fixed soon.

1997. With leukemia. My black belt jiu-Jitsu. 100-km fund raising bicycle ride, the day before I was admitted to hospital for my bone marrow transplant.

2003. World Transplant Games Nancy France. Bicycle racing in the extreme heat. Diablo. Around 45c at race times. One of the British athletes died in the heat. 35,000 died in Europe, most of them in France. Global warming.

Fortunately I have until late 2022 to qualify for the Boston Marathon Qualifying time 4.20. It won’t be easy.

So the Moral of this story – no matter what mountain crops up before you, never give up, just climb over it and carry on. Just like Bob Hardy., who says that there’s never been a day that he’s felt sorry for himself. “I’ve overcome countless obstacles and jumped over hurdles and am really quite happy with my life. I’m really very happy.”

On May 23rd, Bob did a 10km-racing-stroll-with-achy back on the Glengarry Trails in Alexandria. He was fundraising for the Ottawa Hospital as part of Ottawa Race Weekend and you can tell that he is pushing himself as always. (He tells me this position makes him go faster!).