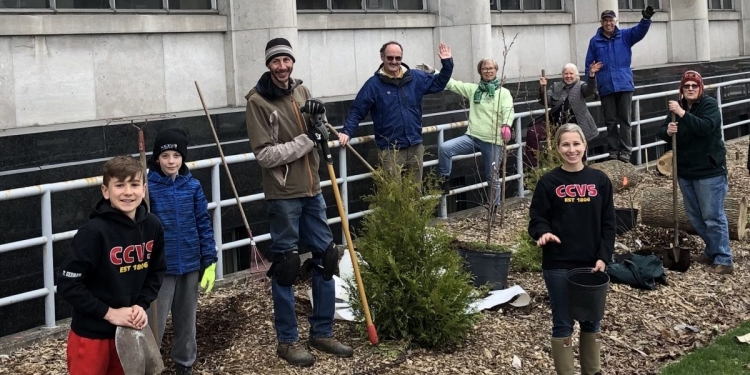 Cities are now looking at trees with a different lens. Not only are trees beautiful in a city scape, but they are also recognized for many other benefits. The latest science is confirming the health and social benefits that trees bring to a neighborhood. We have heard of carbon sequestration, oxygen production, filtering air pollutants, as well as the reduction of the heat sink effect caused by cities. In addition, we are now talking about the aromatic compounds that calm the nervous system and the social statistics that are showing us other benefits such as crime and vandalism reduction from having green spaces with trees. Unfortunately, in the last few years, the city of Cornwall and surrounding areas have lost about one third of the urban tree canopy due to the emerald ash borer. We have also witnessed how deforestation has been devastating our municipal tree cover as well as our rural forests.

In 2019, during the rebuilding of Sydney Street infrastructure, the city had to make the decision to remove several mature trees growing in a patch of lawn by the Cornwall Public Library. With old trees being removed there was an opportunity to plant new ones.

Coincidentally, a technique was being promoted about foresting small plots of land, known as the Miyawaki tiny forests. This method incorporates the characteristics of a mature forest in a newly planted tiny forest. Through supercharging the soil and thereby accelerating the growth of the trees to replicate decades of natural succession that would have occurred on the land. The Tree Action Arbre group thought that this tiny forest strategy would work here at the city center library location and that a small project such as this one could bring more attention to the importance of trees in our environment. A mature forest has a dense mat of organic matter made of leaves, twigs and branches which supply the perfect conditions to support a forest-based ecosystem. When you build a new tiny forest, you must start by eliminating the grass, which is a species of plant that supports a totally different soil ecosystem from trees. The next step is to lay down a generous amount of organic matter followed by several inches of wood chips. Fortunately for this project, the city was able to supply several tons of leaf compost for the organic matter and wood chips that came from the dead ash being cut down.

Such a soil foundation becomes home for mycorrhizal fungi, which we now know as the key ingredient in a forest. Mycorrhizal fungi are nature’s internet, allowing the trees to exchange information and nutrients. This underground communication can protect trees from drought, pests and pathogens that can cause disease. Mycorrhizal fungi help build the soil structure that the trees need. With this technique, trees are planted closer together and thrive much better, as in a forest setting, than in a traditional landscape plan. They race with each other to take advantage of the sunlight which creates taller and straighter trees.

The installation of the Tiny Forest at the library has created some conversations about these subjects and helps people to see their value. In collaboration with the library, there are plans for a student art exhibits to promote the Tiny Forest. This project has also been included in an environmental program at Cornwall Collegiate that helped to plant and maintain the forest and there are also plans to build a sign for the project. In addition, there have been conversations with Central Public School to use it as part of an educational curriculum.

This will be the third growing season for the tiny forest, and it has surpassed my expectations. I am a gardener and I have planted hundreds of trees, mostly edible, and this forest has grown faster and stronger than any of the trees I have planted the same year and the year before. Without a doubt, if cities were to plant more trees using this system it would have a significant impact on their future wellbeing.

The Tiny Forest @ Library is a project developed by the Tree Action Arbre, a working group of Transition Cornwall+. It is located on the east side of the Cornwall Public Library at the corner of Second and Sydney Streets in downtown Cornwall, Ontario. Be sure to pay a visit and check its progress.

Woww! This is a great idea! Congratulations Daniel and people of Cornwal! This idea of Forest Downtown is a great idea!! (Please note that I am speaking to you since Brasília, Brazil. I am a follower of The Seaker. I am brazilian, but a have a canadian son and presenty, he and his family (wifw and two grand daughters) live in Cornwall)