by John Grow
in For What it's Worth
Reading Time: 4 mins read 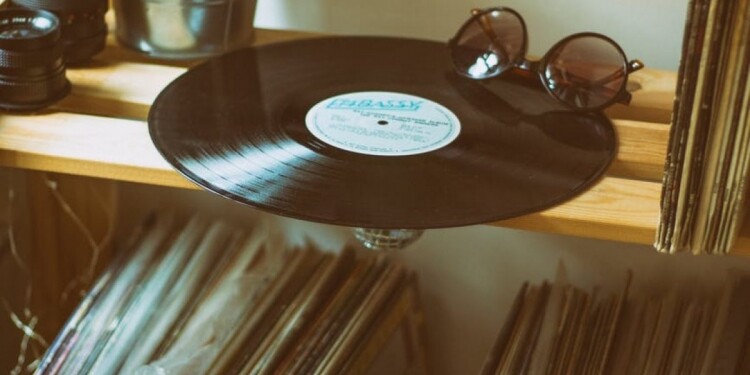 Photo by Alina Vilchenko on Pexels.com

© Our focus is records (Vinyl’s) of all speeds.

A moment to have a laugh: Give a young teenager a record, and ask them what it’s used for?

78 RPM The idea of vinyl records started from shellac and metal discs that were played on early gramophones. The early 1900’s to the start of World War 2 saw 78 rpm discs grow in popularity in the market. They held 3 to 5 minutes of music per side. Many households with elderly family members might have a few of these. There are many collectors for all types of music. The early blues and jazz artists are the most sought after. The most expensive 78 record sold for $37,100.00 US funds. It was a Tommy Johnson’s 1930 and Jake Blues’. If you are not a collector and just want to sell them, I have provided some links below. Please remember to do your own due diligence on the value of what you have. Maybe you have a Willie Brow “M&O Blues”/“Future Blues” Shellac disk from 1931 hiding in a cabinet.

33 1/3 RPM First introduced by the Radio Corporation of America (RCA Victor), they used a closer grove spacing and lower speed to provide 21 minutes per side of playing time. It was later adopted by Columbia Broadcasting System (CBS) which is known as Columbia Records. The longer playing times and marketed as Hi-fidelity, were a great success. Portable players and console stereo’s flew off the store’s sales rooms. It also gave birth to the audio industry, as consumers were looking for the most natural reproducible sound possible. Most used vinyl records date from the mid 1950’s to mid 1980’s. Demand dropped, with the introduction of the cassette tape.
The death of vinyl was announced with the introduction of the Compact Disc, On-line music stores and streaming services. But the love of vinyl records due to the sound, holding a piece of music and accompanying artwork outperformed compact disc sales in 2019. Some of the most expensive vinyl records sold were, ‘Sgt Pepper’s Lonely Hearts Club Band’ by the Beatles and signed by all the Beatles. $ 290,500.00 US, or Miles Davis, ‘Kind of Blue’ 1959 ~ $ 1,000.00 US.

45 RPM First introduced by RCA Victor in 1949, the 7” inch 45 RPM was very small, and depending on the music had its own color of vinyl. The first commercially released 45 was “Texarkana Baby’ by Eddy Arnold. The 45’s were a boon to phonograph manufacturers who were able to make smaller transportable players. The cost of the 45’s were around 40 cents to 75 cents in the 1960’s to early 1970. They held 1 popular song, and the other side a lesser song from the same artist. This format was very popular with teenagers of the time. The 45 RPM had a popularity from 1952 to 1973. The market dropped with the introduction of the cassette tape. Most valuable 45 rpm; Elvis Presley, ‘My Happiness’ his first recording session at the Memphis Recording Service., (Sun Studio) $ 300,000.00 US. Or a Frank Wilson, “Do I Love you (Indeed I do) which sold for $ 37,000 in 2009. Many artists used the 45 RPM as gifts or promotional material.

CONDITION In any collection, the condition of the vinyl is everything and affects its value. When you hold up a record, it should have a clear sheen in the reflection of the light. No sheen or dull sheen indicates a very worn well played record. Is the record sleeve present, is there an inner sleeve? Are the corners of the album bent and looks like your cat nibbled on it. Is the edges of the album sleeve split open? Is there any water damage? Is the surface of the record warped? Is the record scratched, has grim baked on? A very good article on Vinyl Grading System is located at:https://blog.electrohome.com/ vinyl-grading-system-shop-used-records/

WHERE TO FIND INFORMATION ON VALUES It’s very tempting to pick an album from your collection to see its value on a site. Ideally, you are going to be further ahead if you create an inventory. A sample heading to catalog your collection will save time in the long run. Here is one possible heading of a list. Artist-Album Name-Record Label-Genre- Year-Catalog #-Pressing #-Estimated Value

There are many spreadsheets and applications to inventory your collection. Or you can create your own, using a spreadsheet. I personally use a spreadsheet for my small vinyl collection. Once you have an inventory list assembled. The next step is looking at sites which would give you an indication of the record’s value. The most popular sites are: Discogs-https://www.discogs.com Value Your Music-https://www.valueyourmusic.com/vinyl Popsike–https://www.popsike.com Ebay–ebay.com.

Sold listings are all that matters. It may be listed at $ 50.00, but if it sells regularly at $ 12.00, that’s what its approximate value is. Depending on the size of your collection, this process of noting down all the information is time consuming. Once done, it will be easy to update the information. Like all items in a free market, values of everything are changing depending on many factors. There is a large pool of vinyl collectors always on the hunt for good vinyl.

Appraisal Requests that were sent to the ‘Seeker’
Marie Christine, in the Ottawa area, with a 17th century buffet, Portugal, lineage from the royal family of Portuguese monarch. ‘House of Habsburg’ (1581 – 1640) Provenance & research is proven . Market Value ~ $ 60,000.00 US Funds. (no permission given for use of photos)

Next Article: Furniture & Household items. Keep it, Sell it or Donate