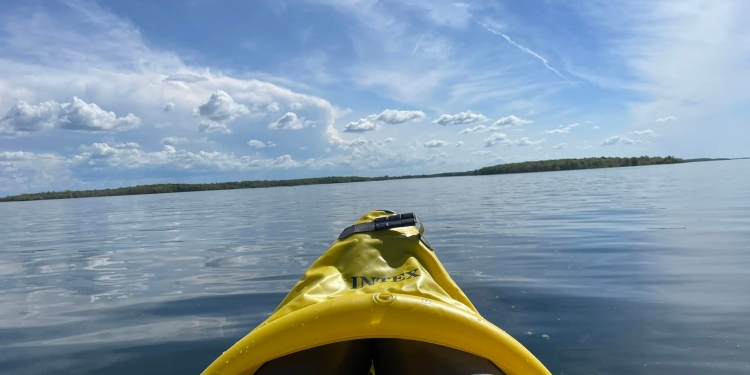 If you are a frequent kayaker, then you probably know the advantages of getting an inflatable kayak over the traditional wooden or plastic ones. If you’re considering an inflatable kayak rather than a hard shell kayak, you’re likely doing so for two main reasons. Firstly, they’re considerably more convenient to transport and store, and secondly they’re much more affordable.

As a result, some hardcore kayakers may look down on them, despite the fact that they provide the easiest entry into the sport. It could be the case that inflatable kayaks don’t really subscribe to the traditional view of kayaking, but still, they offer very tangible benefits as compared to the hard shell varieties. They are a great entry to water sports and you will absolutely love them over hard shell costly ones which can get quite sophisticated and rather pricey as well.

Contrary to popular belief, you will find that the inflatable kayaks can actually look great and offer more versatility than the hard shell ones.  What if, on a first date, you suggested going boating with your potential partner? If someone agrees to go kayaking with you, it’s a sure sign that they like you, but if you have a flashy, costly boat, you won’t know if they prefer you or the boat.

An additional benefit they offer could be welcome news to inexperienced paddlers. In comparison to hardshell kayaks, they provide a great deal of stability. On a tranquil day, it might take some deliberate effort to flip some of them. As with other boats, the wider a kayak is, the more stable it is, and most inflatable kayaks are pretty wide. Additionally, they are noticeably slower than hardshell kayaks, which is arguably the biggest drawback. They aren’t as stable or fast as hardshell kayaks, and they tend to veer off course more often. They’re far less formidable in size, but there are still worries about their potential danger because of the fact that they can be punctured.

Toronto is known for its kayaking enthusiasts and therefore you can expect quite a number of shops ready to sell you any Kayak you want. There are many types of inflatable kayaks and this of course affects the cost. The differences in these varieties arise from the thickness of the PVC used. We can therefore categories them into three different categories.

The first category, which also happens to be the cheapest, consists of inflatable kayaks with a single layer vinyl fabric. It is lighter, and costs about $80 to $150 depending on the vendor. This large price variance exists because different shops have different pricing depending on their marketing, and accessories.

In favourable weather, these kayaks are perfect for leisurely, shorter excursions. This is the kayak to acquire if you’re debating whether or not you’ll utilize a regular kayak. Because of how inexpensive they are, you can often find secondhand ones for next to nothing. If you think you’ll use it frequently enough, though, it’s worth it to invest in a high-quality manual pump and pedal. Typically, the extras are bad for the pumps. Despite popular belief, manual pumps are often just as quick and easy to use as electric ones.

The second category is for heavy recreational kayaking and therefore the fabric is heavier consisting of vinyl in fabric. Due to this, they are significantly less vulnerable to being punctured and have an extra UV protection. You’ll discover the same flimsy plastic compartments within if you unzip that. The average price of a category 2 kayak is between $350 and $800, which is significantly higher than the average price of a category 1 kayak.

The final category of inflatable kayaks of features a thick PVC instead of vinyl. The combination of PVC and rubbers makes this kayak ideal for any kind of kayaking since it offers ultimate protection from the elements and sharp rocks. They’re strung together on the interior to join the two halves. This translates to high-pressure inflatable kayaks with chambers that approximate those of a hard shell, making them rigid and performing more like a hardshell kayak. Unlike the other two categories which feel like inflatable mattresses, this kayak is more stable and lasts significantly longer, averaging about 20 years. It comes at a higher price point of $800 and above.

How durable are Inflatable Kayaks

There is a direct correlation between durability and cost. There is no point getting a costly kayak setting you back $5000 that you will hardly get to use, when you can make do with a cheaper $150 model that gives you about 5 years of everyday use.

Most inflatable kayaks have a lifespan of 5-10 years with regular maintenance and care. Again, this varies greatly because of the many variables at play. Inflatable kayaks constructed from more expensive materials, such as Hypalon, are typically built to endure longer than their PVC equivalents.

Investing in a high-end kayak for $1400 will pay for itself in under four years. The hundreds of dollars spent on a kayak are wasted if it never leaves the garage. So, you want to determine how often you’ll need to use a kayak. If you don’t already have a kayak, I recommend trying out a rental, borrowing one from a friend, or purchasing a cheap category 1 kayak to get a feel for the sport. Category 3 kayaks are top-notch options if you’ve decided you really enjoy being on the water and want to do some kayak touring camping.

The best way to keep your kayak in good condition is to give it a little rinse after each usage and store it somewhere that doesn’t become too hot or too cold. While regular cleaning will slow the rate of degradation of your kayak’s plastic components, it is nevertheless inevitable due to the inevitable breakdown of all plastics over time. Inflatable kayaks that rely solely on glue to keep their seams together may start to show signs of glue degradation about ten years after they were made.

A Comprehensive Guide On Family Mediation