The Wondrous Life of Randy Sauve 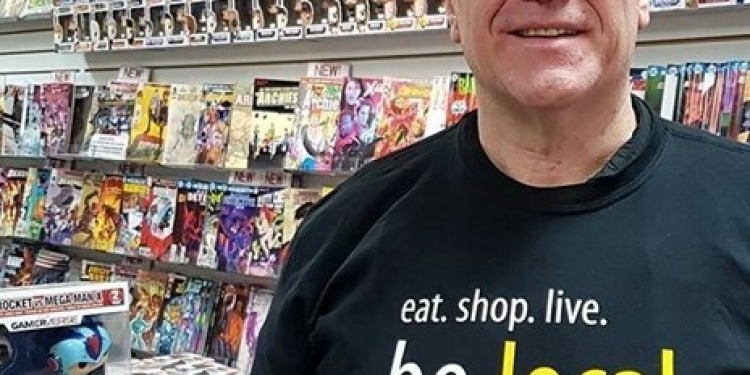 “While researching this story, I came across Joseph Campbell’s myth narrative, and how closely it resembled Randy Sauve’s life journey, and the almost mythical roles of the players within it”.

In Randy Sauve’s small town world, life has been one adventure after another. As a kid growing up, everything was within walking distance. He got himself a paper route for pocket money and ten cent comics. In the transformation, Randy met Carl McLaughlin of Carl’s Smoke & Gift Shop. Visiting the shop when his deliveries were short of papers, Carl offered Randy a job processing weekly magazines. Buried in the stacks, Randy could easily peruse new comics before anyone else got their hands on them.

In 1975, during one of Sandra Coxs’ Art classes at General Vanier Secondary School, Randy was serenaded-like the rest of us-by either Boston or The Doobie Brothers from a turn-table synonymous with creativity & imagination. It was the one class, that nobody was ever late for, as music released our creativity.

In the summer of ‘82, Carl offered Randy the space above his store to open his own shop. At the time, there was nobody in town invested in pop / Geek culture. As his collection grew, space became tight but then a friend offered his basement to the allegiance, but it didn’t last. Turns out dark spaces, like dark horses – do not an image make.

In 1977, George Lucas sat on the precipice of movie-making history with his release of Star Wars. Basing the movie’s premise on Joseph Campbell’s analogy of The Heroes Journey, a myth for the times was born, in which a young hero confronts the same wonders, trials and journeys of old-world heroes. For Randy who watched the film 11 times, it was epic.

By the time Fantasy Realm opened its doors at 227 Pitt Street, Randy was living his dreams. His ability to adapt & teach the Geek in all of us to see the value of our possessions – even on a shoestring budget – is quite the feat. As word got around, kids of all ages visited the shop, trading & collecting as they went.

In 1989, DC released Batman, starring Michael Keaton. It was the first time a movie studio invested millions of dollars in fan-based merchandising. Almost on cue, Randy approached the manager of the Brookdale Mall and set up a table to sell expansions to new hobbyists as they BIFF, CLUNKED AND CLASHED their way out of the main feature. What a rush!

Mentors like Randy’s dad Joseph, were destined to be chosen. A towering Herculean type, Joseph worked for many years in the cement & concrete business. Excellent with figures, his good name made the rounds in this town. Never late; he taught Randy the importance of being responsible. An all-around family man, there aren’t many photos where he isn’t smiling, laughing or pranking somebody.

Randy’s mom Patricia was known for her work as a waitress at The Miss Cornwall Restaurant and later, when she opened Pat’s Home Cookin’ one door north of Randy. An old soul with a strong connection with everyone she met, Pat was her best – in service to others. Seen by many as a legendary, fun-loving person who people gravitated towards; Pat’s easy going nature spilled onto her children, their spouses, grandchildren, friends and even strangers. Of this call to adventure, Pat stood as a bold guardian and mentor during the years Randy worked to expand his business.

In 2012 Randy was introduced to Carol Grant at a party his brother & sister-in-law hosted in their backyard. The pair started going to Comic-cons together in Canada and the US until a couple of years later, when Carol suggested they produce their own convention, called CAPE. Well into its 6th year, it sometimes takes a couple weeks to come down from the natural high of meeting their superheroes and fellow Geeks of TV-land fandom.

The bride dressed as Wonder Woman; the groom was Spiderman, Darth Vader gave Carol away, while R2D2 served as ring bearer. Returning victorious, our hero feels this gift to their community is but a love letter to his folks who stood by him every step of the way.

Although melancholic that his dad wouldn’t see the first CAPE get off the ground, in superhero fashion, Joseph’s energy & kooky humour sustains a new generation through the grandchildren. And to Pat who always saw the bigger picture, was able to attend two live CAPE events; bearing witness to what our hero set out to do. Bringing hope to the people again after so long, was nothing short of a marvel.

Join the Seeker Chicks, Julia and Mai-Liis next week, on August 15th on Monday Morning Motivation as they chat with Randy…