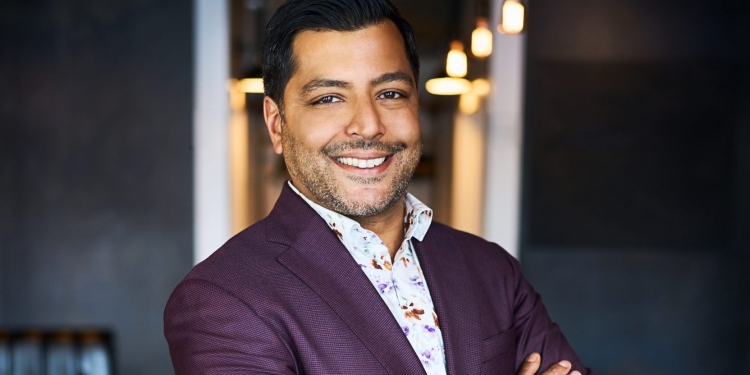 Rizwan Mustafa’s journey thus far is an impressive one filled with adventure, unanticipated surprises, and chance meetings. Listening to his life story, one might conclude that he leads a charmed life – he played polo growing up, has a 3rd degree black belt in Taekwondo, speaks four languages, is a world traveler, and co-owns Sheep’s Head Bistro in Cornwall with wife Josée. Those rewards however came with hard work, dedication and commitment to get Rizwan to where he is today.

Born in Kuwait, a middle child with an older brother and younger sister, Rizwan’s first language was Arabic. In his early years, he lived in Saudi Arabia and Lahore, Pakistan where he learned to speak Urdu and Punjabi while attending school. When the Mustafa family immigrated to Canada, Rizwan was ten years old and spoke no English. Today, he speaks English fluently and is currently mastering French.

Education is highly valued in the Muslim community and parents traditionally play an active role in shaping their children’s educational goals. Rizwan’s father was no exception. He consistently guided his second son towards the field of medicine; however, after graduating high school in Halifax in 1999 and passing the entrance exam to Med School, Rizwan experienced a change of heart. He felt strongly that he was not ready to commit the time and energy required of medical students. Instead,

he had an undeniable urge to travel. As luck would have it, his parents made a rare decision to allow him to travel rather than continue on the path they had envisioned for him.

Over the next several years, Rizwan worked his way across Canada at various jobs in retail, sales, human resources, and restaurants. In Yellowknife, he started out as a dishwasher and worked his way up to Line Cook and eventually to Kitchen Manager. Along the way, he learned every facet of the restaurant business and how each role – from dishwasher to cook and server – ties in together to work efficiently and smoothly like a well-oiled machine.

The food service industry came naturally to Rizwan. His father owned a restaurant in Toronto and his brother was a Sous-Chef in Washington. Food had always been an important part of his culture. He had seen recipes pass from grandmother to mother – generation to generation. Now the food industry was calling him.

By chance, he met a young man at a restaurant in Halifax who would change

the course of his life. His name was Lewis Meehan and the two new friends discovered they shared a passion for exquisite food. When Lewis accepted a position as Chef at the Sheep’s Head Bistro in Cornwall, he convinced Rizwan to join him. Rizwan already had a job waiting in Toronto and could only commit to two months in Cornwall. Again, his life was about to take an unexpected turn.

While serving customers at a table one day, he locked eyes with a redhead who would soon win his heart. The two bumped into each other around town a few times and Rizwan interpreted this as a sign. He and Josée started dating and eventually married. In time, Lewis moved on and Rizwan stayed. He had fallen in love with Cornwall! When an opportunity came up to purchase Sheep’s Head Bistro, he jumped on it. Josée was already a part owner and they would run the restaurant together.

Interestingly, Sheep’s Head (also known as Maitake) is a polypore mushroom that grows at the base of trees, particularly aged oaks and maples. The mushroom is edible and known to have medicinal benefits as well.

Hence, the significance of the mushroom growing out of the bottom curve of the “S” in the name of the restaurant.

When asked about his philosophy on life, Rizwan said, “It would be an injustice not to live up to your ability. The money is not important. Being passionate about your work is what really matters.” As for the future, Rizwan says, “Life is unpredictable…COVID taught us that…however, once a restaurateur, always a restaurateur.”

He credits the love and support of family and the community for enabling them to keep the restaurant open with take-out service during COVID. With the bistro back to full service in-house, it sounds like Rizwan plans to be there for the long haul, which is good news for Cornwall!

If you have not yet visited Sheep’s Head Bistro, check out their unique, mouthwatering menus for Brunch, Lunch, and Dinner at https://www.sheepsheadbistro.ca