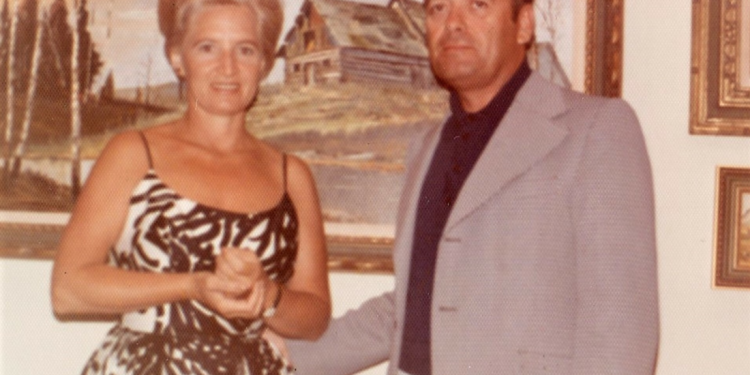 The photograph in this story came with a small black mark across the jacket that was easily spot-fixed out. If all wars could be so easily averted, what a wonderful world it would be”

In the spring of 2014, a man pondered his plans of escape. Dressing in silence; his feet like rustling leaves, made their way past the nurses’ station toward the elevator doors. Wearing a yellow cardigan loose across his torso, the man rode six flights to ground floor, just as a wedge of geese flew overhead. He looked up, smiling towards their call and the tandem influence of the Canadian landscape.

Undaunted by age, his deep blue eyes shone astutely towards home with the understanding that great things are achieved through hard work. Per Ardua Ad Astra. As the OC 14 bus arrived, he asked to be given a break as he didn’t have his wallet. Being a Canadian Veteran had to count for something, he reasoned. ‘Hop on’, said the young driver with a smile.

In August of 1941, the RCAF opened a training school in Belleville, Ontario. In spans of 5 and 10 week intervals, over 120,000 men prepared for trades as pilots, wireless operators and air gunners. In due course, the men were taught proper hygiene, basic military skills and the special maintenance requirements of military equipment.

In the sparsely populated area of Jarvis, Ontario, our man attended Bombing & Gunnery School where Aircraft Recognition standards required men of No 6 Group to visually identify 75 different types of aircraft.

Joining fellow comrades at a Heavy Conversion Unit within RAFs 626 Squadron, out of Wickenby, in Lincolnshire England, our man served as a Bomb Aimer in Bomber Command from 1942 through 1945.

A keen record keeper, the man subscribed to the Wickenby Register in later years, and is where this story turns.

In order to fly a Lancaster four-engine heavy bomber, the crew required seven men. The Bomb Aimer’s role was crucial, especially as he doubled as the nose gunner until it was time to drop bombs. During one raid, our volunteer suffered a lifelong injury to his left knee from his position lying flat in the nose of the aircraft during a deep dive, in complete and utter darkness.

Despite maneuver instructions to reduce anti-aircraft Flak, combat stress for bomber crews was quite high. The Bomb Aimer’s role of capturing photos of dropped bombs added to that stress, as a requisite number of photos were the key to an operations’ success.

On October 14th and 15th, 1944, the crew, piloted by E. F. Fitzsimmons, took part in both day and night raids at Duisburg, Germany, known as Operation Hurricane. https://en.wikipedia.org/wiki/Operation_Hurricane_(1944)

After his discharge in 1945, our hero, and many thousands like him, sailed home on the Queen Mary; earning their way to friendly shores through the ships upkeep. Sharing the tale in later years was one of his fondest memories. https://www.sterling.rmplc.co.uk/history/wartime.html.

Shortly thereafter,hemet the love of his life; Miss Ruth Johnsen. From 1957 onwards, the man worked in Ottawa, as a Draftsman at both the Department of Defence and the Department of Transportation. When it was available, he joined the design team of the Chateau Vanier, where the couple enjoyed 17 storey vistas, for over 40 years. http://vaniernow.blogspot.com/2012/03/chateau-vanier-no-amenities-forgotten.html

Bound by an inhuman determination, the man single-handedly built a cottage on Lac Bataille in the Outaouais, built of stones picked along Ontario roadways. A born navigator, he spent his winters in Florida, driving whatever new car was on the market that season, but if you had to ask; a convertible in metallic blue was the preferred choice.

A most dedicated and loyal servant to his country, our volunteer lived a full 91 years. Admiring this steadfast man with his mother’s deep blues, the family remembers how his keys jingled when departing any gathering. A golf fanatic; he followed the green in any direction. When his niece overcame spinal surgery, his loyalty was legendary and despite what the world thought of them – the couple were Trekkies at heart, – living extremely frugal lives.

Despite these recollections, the missing medals when replaced were mere replicas of a time in history when 7 Canadian volunteers accomplished 43 missions together at the risk of their own lives.

Canada lost 45,000 soldiers, sailors and airmen in World War 2. Between 20 and 25% of those were from Bomber Command. Long overdue, the eventual recognition by the Canadian government in 2012, gave new meaning to volunteerism and heroism.

A take charge man, who made things happen: that was our Jim Gray riding the #14 to breakfast with his one-and-only. Ironically, when Jim passed away that August, the minister presiding over his funeral was Dutch. Overcome by tears, he explained his own parent’s story of immigrating to this country after the war, when Canada and its allies gave the people of Holland the sweetest spring they’d ever known.

What You Can Expect From The Best Criminal Defense Lawyer?