Escape from the Holocaust to Williamstown Ontario in 1939 and 1940

by SeekersAdmin
in News and Announcements
Reading Time: 2 mins read
32 0 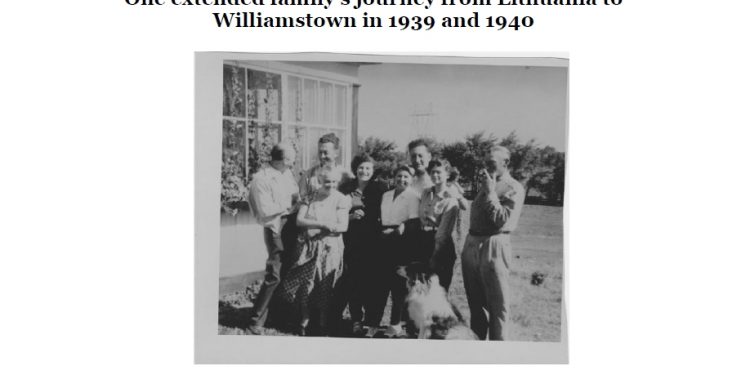 For this year’s Yom HaShoah (Holocaust Remembrance Day) in Cornwall, Ontario, the focus will be on how an extended Jewish family – the Kaplans – escaped from the Holocaust in Lithuania to come to Williamstown, Ontario some 74 years ago. It is also the story of two heroic men who were instrumental in their escape, and of the warm welcome they received from the local people in Williamstown and Cornwall at a time when Canada was generally not accepting Jewish immigrants or refugees.

The children’s book, One More Border, describes the story of one of these families. It shows the role of the Japanese Vice-Consul in Lithuania, Chiune (Sempo) Sugihara, who helped literally thousands of Jews to escape by issuing them transit visas to Japan, against his government’s wishes. Sugihara was subsequently honoured by the Government of Israel as “Righteous Among the Nations” – one of so far more than 24,000 non-Jews recognized as having helped Jews escape from the Holocaust at great personal risk to themselves.

However, not so well known is the role played by Marinus (Mark) Sorensen, the Canadian Pacific Railway’s immigration agent in Denmark. He facilitated the emigration of several thousand farm settlers, including Jews, from Europe to Canada upto 1940 and narrowly escaped capture himself in Denmark after the Germans invaded. Among the Jews Sorensen helped were Sussman and Hinde Kaplan and their four unmarried children. These members of the Kaplan family were able to leave Lithuania just before the
outbreak of World War II, and eventually ended up buying an abandoned farm in Williamstown, near Cornwall, Ontario.

As a result, the other two Kaplan children with their families, had a place to come to in Canada. Even today, there are a few Williamstown residents who have fond memories of the extended Kaplan family, particularly the children – Nomi, Igor and Atid. Two Kaplan family members, Ellayne Kaplan and Ilona Weinstein, from Montreal, will be sharing their family’s story. In addition, Mark Sorenson’s son, Ben (who was with his father in Denmark right up to just before the outbreak of the war), and two of the Kaplan’s children’s former schoolmates from Williamstown are coming as well.

The event will be the first time that some of the Kaplans will be meeting a son of one of the two people who were so instrumental in saving their family from the Holocaust. The Cornwall Interfaith Partnership, which is organizing this year’s event in Cornwall, feels that the Holocaust was a monumental human tragedy that should be revisited periodically in order to make people more aware of the reality of such genocide and its causes. This year’s Yom HaShoah commemoration in Cornwall is being hosted by Knox – St. Paul’s United Church, 800 Twelfth Street East, at 6:45 p.m. on April 7, when everyone is welcome.