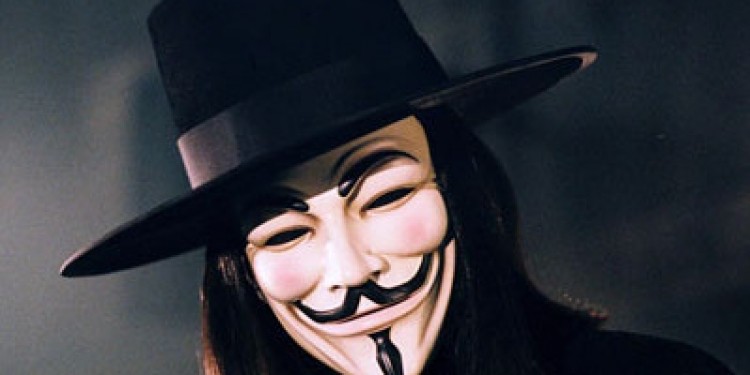 Totally had another review ready to go for this week, that I am going to push because I drove by city hall on Monday night and almost ran into a car because a few of the protesters were wearing a Guy Fawkes mask. Really?

So this review is to remind those protesting what it means to dawn the mask!

People should not be afraid of their government…are we really afraid of the control and power, and perhaps being put to death by any members of Cornwall City Council? Yeah, didn’t think so.

V for Vendetta (2005). This is one of my all-time favorite films and stars Natalie Portman and Hugo Weaving, although you never see Hugo in the movie, you just hear his voice.

It’s the future state of England, and England Prevails. After a plague wipes out most of the rest of the world, England is left standing as a super-power. We meet V (Hugo Weaving) dressed all in black and dawning a Fawksian mask. Based on the graphic novel by Alan Moore, V for Vendetta takes place in a corrupt and abusive totalitarian England. Eve (Portman) is an unassuming young woman who gets rescued by the vigilante named V who is not only articulate but also deadly skilled in art of combat.

Eve is plagued herself by the loss of her brother and parents, during the crisis that lead to the Chancellor’s (John Hurt) rise to power.

All the while we learn the story through the eyes of a police inspector Finch (Eric Rhea) who goes against the corrupt government and seeks out the truth.

Brilliant screenplay written by Lana Wachowski and Andy Wachowski, who used to be brothers, but now are brother and sister, don’t get me started! The culmination of the rebirth of Eve (see the Bible), the climactic battle at the end, the cinematic beauty of the death scene on the train, is truly an incredible work of art. I am going to watch this again tonight. Amazing imagery in an action feature quite like the flight of the Valkyries in Apocalypse Now.

So to all you would be Fawksians out there…take off the masks, and put them in the closet until November. We live in the greatest Country in the world, and the most beautiful city in Canada. #MyCornwall is amazing!