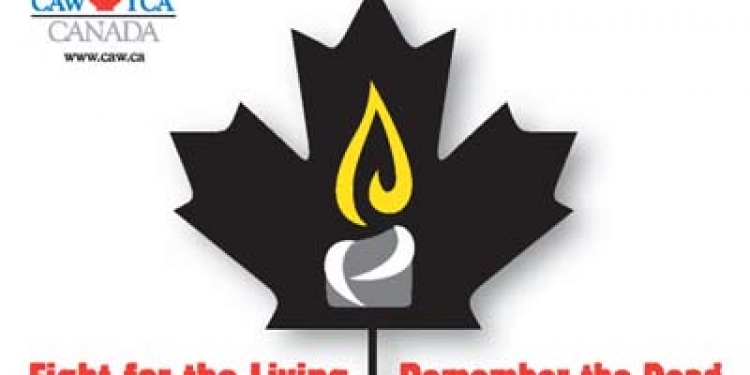 Cornwall Ontario — On Friday, April 26, the Cornwall & District Labour Council invites members of the general public to join civic and labour leaders to join them as they observe the National Day of Mourning for workers killed, Injured or made ill on the Job.

Each year, the Cornwall & District Labour Council observes the National Day of Mourning for workers killed, injured or made ill on the job. Since the Day of Mourning was established by an act of Parliament in 1991, Canada’s attempts to ,
In response to a groundswell of labour activism for workers safety, the govt.. but the attempts to raise awareness and increased profile have been disappointing.

Is Today the day you die at work?

Over 1,000 Canadian workers are dying every year. In Canada, four workers die each day.

The number of people killed at work each year in Canada has risen for the past 15 years. This is in contrast to almost every other OECD country where the incidence of workplace fatalities is declining. In 2007, according to the latest report from the Association of Workers’ Compensation Boards of Canada, 1,055 people lost their lives at work. That’s four people every work day. Dead because their workplace was not safe.

Four people every day who never come home again. Dead because their employer failed to ensure they were safe at work. In addition to these workers killed at work, there are many others where the death goes unreported if they die of a disease unrecognized as an occupational disease.

The need for enforcement

We have some of the best health and safety laws in the country, yet the number of workers that lose their life continues to increase. In many jurisdictions, the monitoring of labour and safety standards has been drastically cut back, or even replaced by “voluntary” industry compliance.

Canada can do much better.

It’s time for the provinces and territories to appoint special prosecutors to lay charges against employers when their actions cause death or serious injury. More inspectors must be hired to ensure employers comply with the law. It’s also time for all governments to enact new regulations that deal with known dangers in today’s workplaces, including workplace violence, exposure to toxins and carcinogens, repetitive stress injuries and injuries caused by poor ergonomics, workplace harassment and stress. Any workplace death or injury is preventable.

Thousands of men and women, some as young as 15, have needlessly had their lives taken over the past 25 years by their employers. How many more of us have to be killed before governments finally take action?