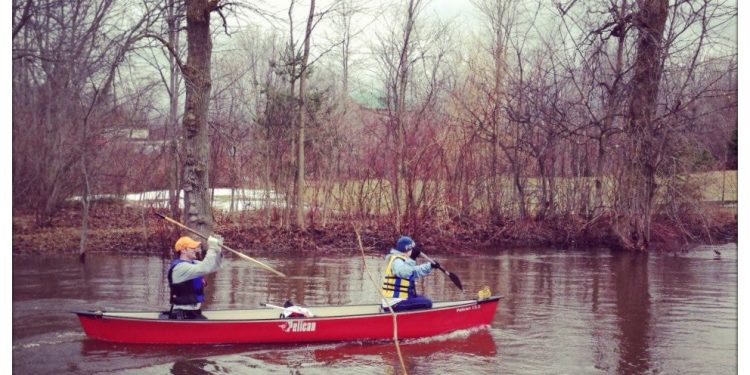 The 41st Raisin River Canoe Race was held on Sunday. The weather was cold, rainy, there were periods of sleet and snow. Despite all that, over 150 canoes set off from St. Andrew’s West and in the end 129 successfully made the 30+ kilometer trip along the rapids of the Raisin River to the finish line in Williamstown.

This year, the water levels were much higher than last year: the water was fast and in places, very hairy. At the safety meeting prior to the race it was decided not to allow paddlers to attempt to “shoot the dam” in Martintown. The water levels were just too high, forcing everyone to opt for the much safer and dryer overland portage.

The fastest canoe down the river clocked in at 2 hours and 21 minutes. It was piloted by Getan Plourde (from Perth) and Ian Mockett (Stitssville) – who teamed up and out paddled Bonnie Pankiw and Christoph Weber of Chelsea, Quebec. Local hero, Corey Van Loon, of St. Andrews, had to settle for third this year – an untimely spill on the McIntyre Rapids set him back over 2 minutes, which was the difference between 1st and 3rd.

In the annual high school competition, paddlers from Char-Lan outnumbered all the other high schools, earning them bragging rights to the Alexander MacKenzie Trophy. The Martintown fire department was awarded the Simon Fraser Memorial trophy for their many years of dedicated service in ensuring the safety of the race participants.