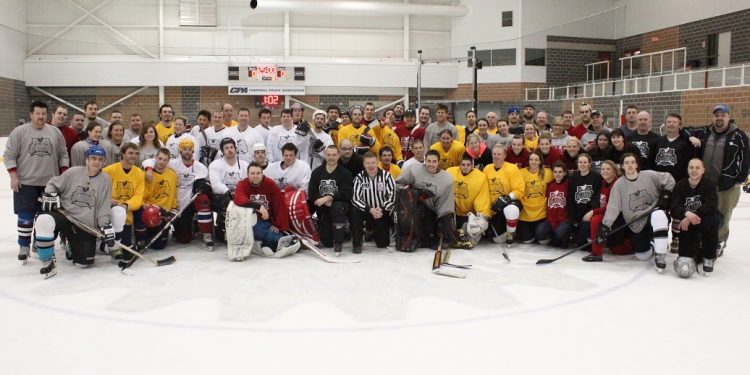 Cornwall Ontario — It was a successful weekend for the SLC Sharks hockey coaching staff and St. Lawrence College Athletics staff at the first ever Sharks Hockey Alumni Weekend. Over 100 current, former, and Sharks family and friends attended the inaugural event that brought back players to reconnect, reminisce, and to play Sharks hockey once again.

Participants and friends arrived on Friday April 5th to receive their tournament package that included SLC swag, a commemorative Sharks t-shirt, a tournament jersey & puck, and most importantly, reconnect with the Sharks hockey program to reminisce and share stories from classic memories.

“It was great seeing so many former players tonight. We had a great turnout, and it really builds up for the games and pub night on Saturday” said Sharks coach Sean Boulerice added. Players from several generations enrolled, including a few members from the original Road Runners team from the mid 1970’s.

Games started bright and early on Saturday morning, with each of the five teams playing four 20 minute (run time) games prior to two semi-final games, and the championship game. It was clear that games were kept fun and entertaining, but with a slight edge with teams wanting to finish in first place. Players were spending time in-between games catching up with their teammates and friends, reminiscing on old stories, and meeting other former and current Sharks players.

With team Grey being crowned winners of the Sharks Hockey Alumni Weekend, the shoot-for-cash contest took place, with Pat Quenneville winning the round robin and was given the opportunity to win $10,000. Pat had to shoot 16 out of 20 pucks from the far blue line into an empty net within 20 seconds. Pat quickly got all 20 pucks down the ice, but was only able to put 7 into the back of the net.

From there, the event moved from the Benson Center to the Sharks Pub for a full night of socializing that included several prizes being given away, a live band, midnight poutine bar, and even more reminiscing and storytelling.

“We can finally sit back and say we did it! What a resounding success. I knew it was going to be good, I just did not visualize it being as awesome as it was. Mike (Pettinella) and I may have initiated the idea but the Alumni and Athletics staff took the ball and ran with it to make it a reality” said Sean Boulerice.