by SeekersAdmin
in News and Announcements
Reading Time: 4 mins read
24 0 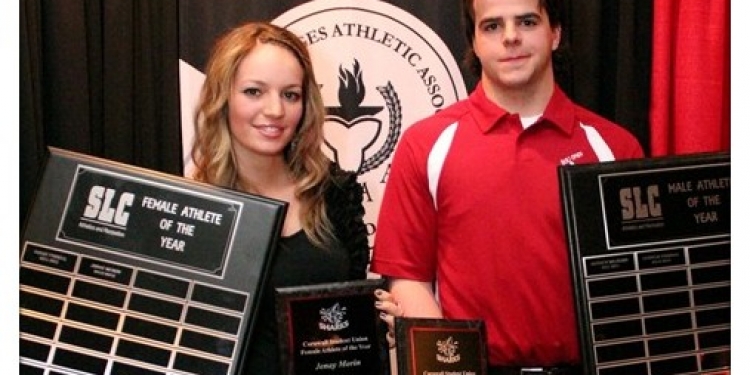 Cornwall Ontario — The St. Lawrence College Athletics & Recreation honoured its student-athletes from the Cornwall campus, at their annual awards ceremony at the Ramada Inn & Conference Centre on Thursday April 4th.

“The Athletics banquet is a time honoured tradition to celebrate, reminisce and recognize the great achievements of our student-athletes,” said Jacquie Cartwright, Athletics and Student Life Officer at the Cornwall campus. “Sharks athletes showed great commitment and determination this year and deserve full acknowledgement for their success. Our small campus had some great moments this year; the women’s and men’s hockey teams winning several invitationals, including the women’s team winning the silver medal at the Challenge Cup, our women’s and men’s indoor soccer teams whom both won second place at the SLC Tri-Campus Cup, Sharks golfers finishing in the middle of the pack in a close leaderboard at the Ontario College Athletics Association (OCAA) Provincial Championships, and the three member cross country team that still managed to record impressive times and results” she added.

This year’s major award winners went out to Jenay Morin and Connor Primeau from the women’s and men’s hockey teams. As team captain of the women’s squad Jenay was named the Student Union Female Athlete of the Year, after finishing the regular season with 17 points, scoring 7 goals and 10 assists in only 16 games. She has ben a Shark for 3 years and has been proud of it. Two years ago, she led the team in scoring as a rookie. Last year she followed suit. This year, she tied for the top spot. Over the course of her career, she has put on the Sharks jersey 51 times and has accumulated 43 points. “She is the true definition of a captain” said Sharks head coach Sean Boulerice. “She leads this team on and off the ice. She’s the one speaking up before and after games in the dressing room, getting the girls pumped up. On the ice, she works hard each and every shift, creating scoring opportunities for her teammates, while being one of the first players to come back and support the defense” he added.

Sharks centreman and assistant captain, Connor Primeau, was named the Student Union Male Athlete of the Year after finishing a remarkable season with the men’s hockey team that saw him record 10 points (7 goals and 3 assists) in 18 games during the regular season. Nicknamed ‘Angel’ on the team, the always quiet and calm one in the dressing room, Primeau takes every shift like it’s his last, playing as hard as he can to put the puck in the net and create opportunities for his teammates. Connor was one of the best all around hockey players in the history of the program. He is the true definition of an athlete. He has discipline, desire, commitment, and heart. He is regarded by his teammates as a shootout specialist and put up great numbers, but he is equally impressive when he doesn’t have the puck. “Connor has totally dedicated himself to the Sharks hockey program. He comes to every practice and gets involved with trying further improve the program” said Sharks coach Mike Pettinella. “He approaches each shift as an opportunity to put the team ahead, and he’ll work his butt off trying to either score or create an opportunity for his line” Mike added.

Andy Yang, was awarded the Sportsperson of the Year award for his valuable dedication to the Sharks Cross Country team. Despite there only being three members on the squad, Andy managed to record incredible times during the season, including finishing 43rd out of over 100 runners at the OCAA Provincial Championships. Andy also added valuable leadership to the Sharks team, helping coach new runners. What is most impressive about Andy is at the year end championships, Andy stepped in at the banquet to help the shorthanded staff setup tables and the stage for the awards. He is always thinking of others and always wants to make sure that others are happy and well cared for.

Andy also received an OCAA All-Academic Award for maintaining a GPA over 3.5 during the 2012-13 school year.

Academic and Athletic Excellence Awards went to Pascale Lacroix and Yannick Rochon, both from the women’s and men’s hockey teams. These two athletes dedicated their time and hard work to their teams, while maintaining GPA’s of 3.89 and 3.95.

Each Varsity and Extramural program handed out individual player awards, to acknowledge the efforts of members from their team during the 2012-13 season. The award winners this year are:

Click here to view the pictures from the night have been uploaded to the SLC Athletics & Recreation Facebook Page. Kudos to the Sharks Athletics Department for hosting such a great event!