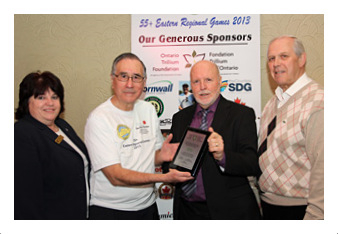 ChooseCornwall.ca — Who says you have to be young to play competitively? The 55+ Eastern Regional Games are coming to Cornwall this August, and the event is expected to attract between 500 and 600 participants aged 55 and over. The Games will be held August 20th.

“We are honoured to host the second 55+ Eastern Regional Games,” stated games chair George Baker. “In addition to the event itself, there will be spinoff economic benefits for the community, with 500 to 600 visitors coming for a day.”

The Games are being hosted by District 8 of the Ontario Senior Games Association. District 8 comprises Stormont, Dundas and Glengarry (including Cornwall), Prescott-Russell, and Akwesasne.

Other participating districts in the 55+ Eastern Regional Games include Renfrew County, Kingston/Frontenac, North Lanark, Lanark/Leeds/Grenville, Ottawa West and Ottawa East. Twelve events will be showcased during the Games:

Local events will be held throughout Eastern Ontario from April to June. Medal winners in these events will be eligible to compete in the Regional Games, in Cornwall, in August.

“This is a great way to showcase our community to visitors while also promoting the benefits of active living,” said Mayor Bob Kilger.

As an adjunct to the Regional Games, District 8 will conduct a legacy program over three years in which members of the committee will visit schools and promote an active lifestyle to youth. This year, the committee is introducing pickleball to students at Glengarry District High School in Alexandria.

“We want to promote an active lifestyle for youth,” said Vickers, “and we’re hoping they take the message home to their parents and grandparents.”

The Ontario Senior Games Association is an incorporated non-profit organization which promotes an active life style for all residents of the province aged 55 years or more. The organization comprises 41 districts throughout the province which are grouped into seven regions. For more information, visit http://www.ontarioseniorgames.ca.