by SeekersAdmin
in News and Announcements
Reading Time: 4 mins read
28 2 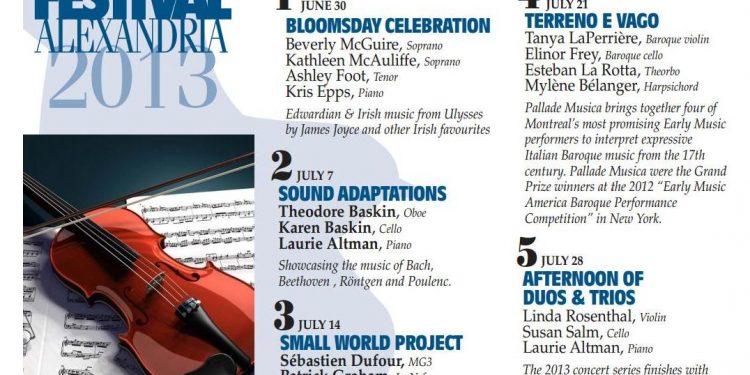 Alexandria Ontario — This summer you can enjoy talented performances and chamber music at the Festival Alexandria (3689 Country Road 45). Event tickets are $20 for adults, $10 for students and seniors, and children under 12 can attend for free. Each event takes place at 3pm. Events take place June 30th, July 7th, July 14th, July 21st, and July 28th. Here are a list and biography of performers in order of each festival date.

Theodore Baskin, Principal Oboist of l’OrchestreSyphonique de Montreal since 1980, has appeared as soloist in Canada, the United States, Russia, New Zealand and South America. He has recorded four Vivaldi Concerti for Chandos records as well as over 60 recordings with l’OSM for London Decca. Mr. Baskin has appeared in numerous festivals including Mostly Mozart with the Chamber Music Society of Lincoln Center, the Marlboro Festival, Festival Alexandria, and Orford where he teaches master classes. He was Professor of Music at Indiana University for two years, and is currently Professor of Oboe at McGill University.

Karen Shaffer Baskin, cellist, studied at Indiana University with Fritz Magg and Janos Starker, where she earned a certificate of Outstanding Performance. A member of l’OSM since 1989, she has been heard in chamber music recitals at McGill University, on Radio Canada, and is a regular performer with the Serenata St. John’s chamber series. Ms. Baskin enjoys teaching cello to young people.
Pianist Lauretta Altman studied at the Juilliard School of Music in New York City. She then continued her studies in France and Italy and with Philip Cohen in Montreal. Since 1975, she has been on the faculty of Concordia University. Ms. Altman has been heard frequently on Radio Canada and on the CBC and has appeared as soloist with the Montreal Chamber Orchestra. She has performed in Vienna, Brussels and New York, and has been recorded and featured on three recently released compact Discs. Ms. Altman is Founder and Artistic Director of Festival Alexandria.

Small World Project – Winner of the 2011 Opus Prize for the Concert of the Year in the Jazz and World Music category and winner of the CBC Galaxie Rising Star award, Small World Project constantly amazes with its arsenal of small stringed instruments (ukulele, charango, banjo-uke, strumstick, etc.), mini percussion instruments and a double bass. The Montreal-based musicians SébastienDufour (MG3), Patrick Graham (La Nef) and Frédéric Samson (Vent du Nord), offer a unique and eclectic sound in which jazz, classical, spaghetti western, afrobeat, reggae, minimalist, middle-eastern magically mingle with Cuban montunos, Brazilian samba, Italian tarantella and even Jimi Hendrix. On stage, the charismatic trio dazzle audiences with their thrilling, high-energy performances – critics have even compared them to the likes of Paganini and Hendrix!

Last June, Small World Project premiered a unique performance concept combining the first animated film in the history of cinema, LotteReininger’s The Adventures of Prince Ahmed (1926) with a live performance of a brand new score composed by the trio. This winter, Small World Project will again perform this exciting new soundtrack to projections of the Arabian Nights-inspired movie throughout Quebec and Ontario and will then head to the studio to record a new album featuring the full version of this score.

PalladeMusica brings together four of Montreal’s most promising Early Music performers. Having played together for the past three seasons in groups such as Ensemble Caprice, Arion, and Proemio, the members of PalladeMusica discovered that they shared similar musical interests.
PalladeMusica, was chosen as the grand prize winner at the first Baroque Performance Competition in New York City on Oct. 10. Six finalist ensembles competed in a concert at Corpus Christi Church and PalladeMusica was awarded the $3,000 grand prize.
The only Canadian ensemble among the finalists, PalladeMusica brings together four of Montreal’s brightest young early music specialists: Tanya LaPerrière, violin; Elinor Frey, cello; Esteban La Rotta, theorbo and MylèneBélanger, harpsichord.

Violinist Linda Rosenthal performs throughout North America, Europe and Asia as a recitalist, soloist with orchestra and as a chamber musician. She has been Professor of Music at University of Alaska, Southeast, Director of the String Chamber Music Symposium and Founder and Artistic Director of the annual Juneau Jazz & Classics Festival in Juneau, where she makes her home. Ms. Rosenthal has recorded 5 solo CDs and has commissioned and performed more than adozen works, including, recently, a concerto for violin and jazz big band. She is also the creator and violinist for Strings & Stories, a 2-person show for young audiences that made its debut at the Kennedy Center in Washington, D.C., in 1975 and that has since been performed for thousands of school children throughout the United States. Ms. Rosenthal plays on a violin made in 1772 by J.B. Guadagnini.

Cellist Susan Salm received her earliest musical training in her native Chicago and later studied at the Juilliard School with Leonard Rose, and Harvey Shapiro as well as in the master classes of Casals, Fournier and Piatigorsky. As orize winner of the Concert Artists Guild Award Ms. Salm was presented in her New York debut at Carnegie Hall. Since then she has appeared with major orchestras, in solo recitals, on radio and television and in chamber music festivals in the U.S., England, Europe and Canada performing standard repertoire as well as works composed for her. Founding member of the Raphael Trion, founder-director of the Raphael Trio Workshop and co-director of Music at the Ouray Festival, Ms. Salm has also been visiting artist at the Hartt School and at the Manhattan School of Music. Ms. Salm has recorded for Sony, Newport Classic and Nonesuch, among other labels.

Pianist Lauretta Altman studied at the Juilliard School of Music in New York City. She then continued her studies in France and Italy and with Philip Cohen in Montreal. Since 1975, she has been on the faculty of Concordia University. Ms. Altman has been heard frequently on Radio Canada and on the CBC and has appeared as soloist with the Montreal Chamber Orchestra. She has performed in Vienna, Brussels and New York, and has been recorded and featured on three recently released compact Discs. Ms. Altman is Founder and Artistic Director of Festival Alexandria.

Your Cornwall Community Police News for May 21st 2013