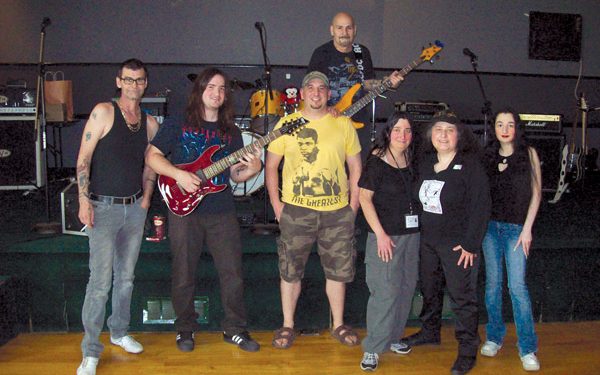 On May 4th 2013, the “Music Misfits N’ Mischief” event by 3Angels Power Film Production INC shook the walls of the Banquet Hall at Murphy’s Inn with success.
Local artists such as; the Rundowns, Unknown Devil, Big S, CMO and the HEATLEY Band gathered to give Cornwall great performances. They truly knew well how to rock Canada’s Soul with their music. The attendance was sufficient enough, volunteers did a great job, and everyone left with a new happy memory including Josh Welsh who is one of Franceska Finger NailZ cast members. The people were amazed by the raffle gift baskets, and silent auction. The audience personally voted, and cheered for the dance contest. 1st, 2nd, and 3rd prize winners claimed their gift bags as a reward with open arms, and a big smile. 3Angels Power made Music Misfits N’ Mischief event to help boost the funds of Franceska Finger NailZ, a local horror movie that will be set into motion by June 1st 2013. Our film company will release a highlight reel online as a newsflash to share the news with the community.
At the same time, the event also was an open door for a few lucky local artists to shine through a new web series called “Canada Rock My Soul” which will go straight to DVD, and will be released later online. One of our main intentions was to film clips of the volunteered performances to use in our upcoming webisodes. Each episode will represent the artist creatively, and give him/her the proper exposure, and promotion needed. It will introduce his/her career in a form of a brief biography that will be considered a stepping stone or a foundation for their musical background and experience. “Canada Rock My Soul” would be considered as a resume and a video card to ID their creative talent and endless passion for music. 3Angels Power as a film production company believes that building a better tomorrow starts with encouraging local projects and local artists today. So, stay tuned for more electrifying news coming your way soon.
3Angels Power Film Production INC

MPP Jim McDonell claims there is growing support for Bill 61