by SeekersAdmin
in News and Announcements
Reading Time: 1 min read
28 0 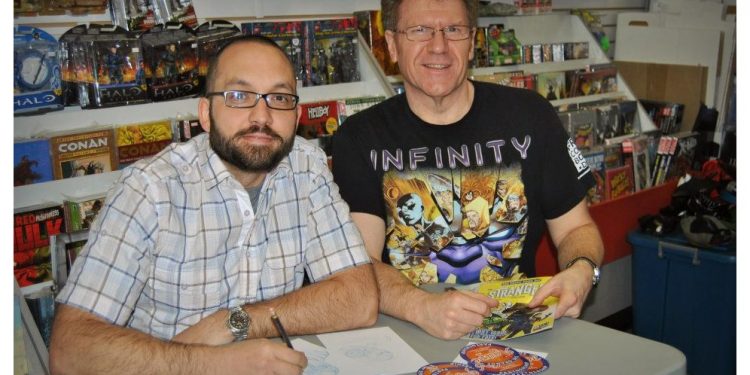 Cornwall Ontario — Saturday May 4th was Free Comic Book Day. It was celebrated at Fantasy Realm in Cornwall Ontario. It was super and it was fantastic!

“Free Comic Book Day 2013 was the most successful event ever at Fantasy Realm. It is always a pleasure to see faces old and new come into the store and this yearly event introduces many people to one of the greatest forms of entertainment, reading comic books”, says Randy Sauve who is owner of Fantasy Realm.

Visual artist Frank Burelle spent the day at the comic book shop helping raise money for the Agape Centre drawing scetches. You can see Frank Burelle’s comics in the Seeker newspaper each week.

Also on location was owner of Tyrannosaurus Bex Custom Creations Rebecca Sorrell. She makes custom items such as shoes out of comic books.

“I spent an amazing day at Fantasy Realm today. So many happy faces, young and older alike. I think what impressed me the most though was seeing the way that Randy dealt with customers. Despite being insanely busy he was so friendly to everyone, whether they were making a purchase or not. Cornwall is lucky to have had such a great business around for the last 28 years”, said Sorrell.