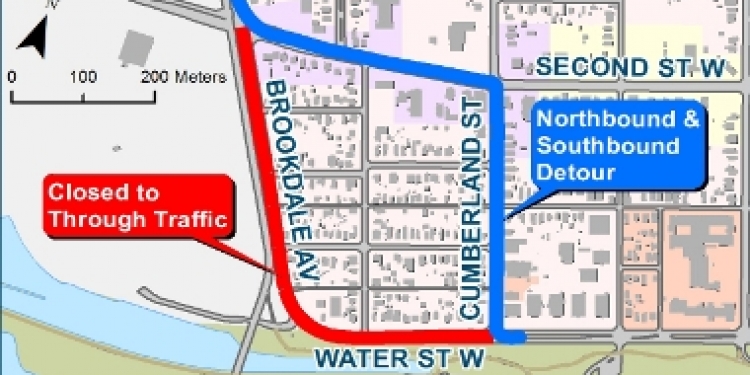 Cornwall Ontario — Motorists are advised that the section of Brookdale Avenue south of Second Street and Water Street west of Cumberland Street will be closed to through traffic for approximately four months beginning Monday, May 6th in order to complete work associated with the bridge project.

Through traffic will be detoured via Cumberland Street and Second Street during this work period. The area will remain open to local traffic only for resident’s access to properties within the closure area, where construction activities permit.

The section of the recreational path near the bridge construction site is expected to remain open during this period, however users should note that this could change subject to construction activities.

The closure is necessary in order to complete work associated with the new bridge project.

A project of the Federal Bridge Corporation Limited, the bridge work is separated into four separate contracts:

Contract 2 is currently underway, and part of that involves work being done on behalf of the City, including upgrading the Combined Sewer Overflow (CSO) facility, constructing deep sewer works which will facilitate future sewer separation and the replacement of old sewers and watermains at the intersection of Brookdale Avenue and Water Street.