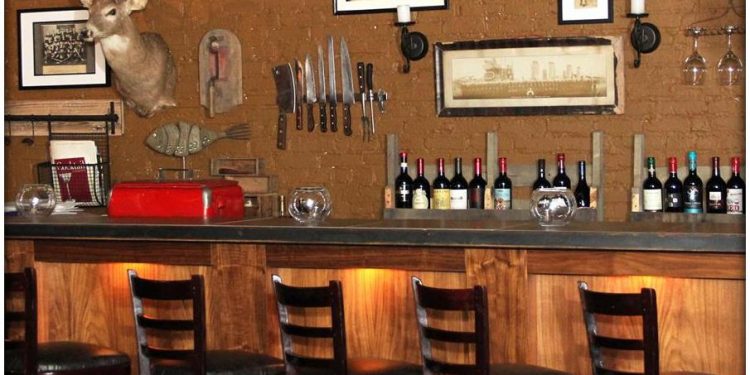 Cornwall Ontario — There is a new restaurant in Downtown Cornwall, which is a reason for steak and seafood lovers to celebrate.

The new restaurant seats 72, and adds another dining choice in the heart of the city, which has seen several new restaurants open up in the past couple of years.

“It’s healthy to have a group of restaurants in one area,” says Chef Barque. “It creates a certain atmosphere and will help make Downtown a destination for people looking for a good meal.”

Bar Q’s menu will feature a variety of steak and seafood dishes, although the Q Ribeye Steak has already secured the featured spot on the menu. The “Q” is a 13 ounce ribeye AAA Black Angus reserve steak cooked to the diner’s preference.

Another favourite with patrons is the Risotto Balls, which feature risotto, wild mushrooms and Boursin cheese rolled in a pretzel crust. The appetizer is served with Spanish sausage on the side.

“My goal was to create a menu that showcases traditional meats with unique flavours,” says Chef Barque. “I plan on changing things up on a regular basis, especially as certain foods come into season.”

The restaurant menu is prominently displayed on an antique roll of butcher’s paper – the first indication of the eclectic décor that can be found throughout the restaurant.  From the Mason jar chandelier over the bar to the oak tables that were hand-crafted using wood from an old dance floor, a lot of the décor seems to have been repurposed from a former life.

“Heritage is very important to me,” says Chef Barque. “There is a certain beauty in the way things were once made, and we should celebrate our past.”

It is a somewhat surprising sentiment from a man who still is relatively young. Chef Barque graduated from the Culinary Program at Cambrian College 13 years ago, and apprenticed at the prestigious Institut des l’Hoteliers in Montreal. He worked at the infamous Willow Restaurant in Hudson before opening Knox Fine Dining in Moose Creek in 2008. He sold his interest in Knox and has been sharing his knowledge with a number of private cooking classes, amongst other things.  It was however, time to once again open his own place.

“I have working towards this opening for over a year now,” says Mr. Barque. “My goal was to create a spot where people would feel comfortable. A place that is just slightly off the beaten path – a place with character, where people can start to create their own history.”

One of the changes he has made to his restaurant is to relocate the front door just around the corner to First Street. The change helped create an additional 22 seats, but the move was all about creating a sense of discovery.

“There is always a bit of excitement at what may be waiting for you when you walk around a corner,” says Mr. Barque. “It’s that spark of discovery that I want to nurture as people open the door and walk into the restaurant.”

Bar Q will be open for dinner Thursday July 18, and then ongoing from Tuesday through to Saturday. It will also be open for lunchWednesday, Thursday and Friday.  Reservations are recommended.

High Heat and Humidity Advisory in Effect for Eastern Ontario