Ringside by the River for Golden Gloves Championship 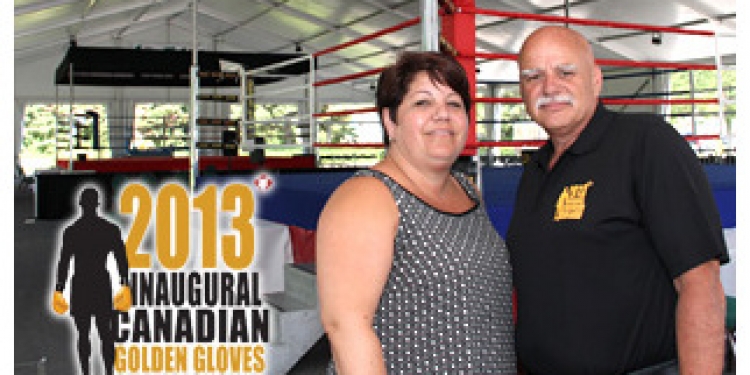 ChooseCornwall.ca — Boxers of all ages and weight categories have started arriving for the Canadian Golden Gloves Championships. The tournament gets underway at the NAV CENTRE Wednesday July 17 and runs until Saturday July 20.

The Golden Gloves Championship will provide an opportunity for boxers to showcase their skills in front of top ranked referees and judges. This major competition is open to both male and female athletes from age 11 to age 40.

“250 athletes are expected to compete from across Canada and the United States,” said Robert Crete from Boxing Canada.

Boxers will be classed by both gender and age, and then matched to opponents by weight. At the end of the competition, the winners will hold the title of Canadian Golden Gloves Champion.

“The Canadian Golden Gloves is an important competition for Canada because it gives our boxers an opportunity to compete at tournament against boxers they would normally never be able to have seen,” said Pat Fiacco, President of Boxing Canada. “Athletes improve their performance with increased competition and the Canadian Golden Gloves will do that.”

Cape Breton Coach Brad Ross is bringing four fighters to the tournament so that they can face higher level competition which is difficult to line up closer to home.

“It is going to be good for our fighters because you get to compete at that higher level and see a big tournament,” he said. “We always train four days a week, but now with the competition coming we have been training 5-6 days a week with all kinds of running.”

Local residents may very well have seen some of the boxers training along the Recreational Path that runs along the St. Lawrence River in front of the NAV CENTRE. The path is also just a couple blocks away from Cornwall’s Champs Eastside Boxing Club, which has four athletes competing – two female and two male.

Representing Champs will be Robbie Cook (19) of Massena and Taylor Little (21) of Perth and their male club mates Doug Poirier (20) and Isaac Benedict (11), both from Cornwall. Poirier will fight in the open class (165 pounds) while Benedict will fight in the junior boys novice class.

“It’s a good thing,” says Champs trainer/owner Jorge Luis, of the city hosting the Golden Gloves tourney. “It will create some interest in the sport, and interest in the club.”

NAV CENTRE officials have been planning for the Canadian Golden Gloves for 10 months, working closely with Boxing Canada officials to meet the technical specifications of the sport. It helped that the facility hosted the Continental Elite Championships just over a year ago.

A highlight of this tournament will be the large tent (82” wide by 147” long) which will serve as the competition venue. The tent accommodates two official size rings and seating for over 250 spectators.

“We were looking for atmosphere and a different setting then what a gym or arena could provide, and Boxing Canada loved the idea of outdoor space,” said Dawn Guindon, Sales Manager of the NAV CENTRE. “The transformation of our back parking lot into an outdoor athletic grounds is amazing.”

Members of the public are welcome to come and watch the competition. Day passes are $10 while a tournament pass is $25. Admission for children is free. Competition begins Wednesday July 17th at 4:00 pm, resume on Thursday & Friday at 1:00 pm & 7:00 pm and championship bouts begin at Saturday July 20th at 1:00 pm.

The atmosphere around NAV CENTRE is electric with athletes, coaches and officials all preparing for the big opening on Wednsesday.

“It is truly amazing to see so many people gathered here in a common competitive spirit, to challenge for the title of first-ever Canadian Golden Gloves Champion,” said Kim Coe-Turner, NAV CENTRE’s General Manager. “We’re happy to host this historic event.”

“NAV CENTRE is the perfect place,” agreed Jorge Luis. “It’s an all-in-one spot. Everything is right there.”