Meeting being held to discuss formation of broomball league 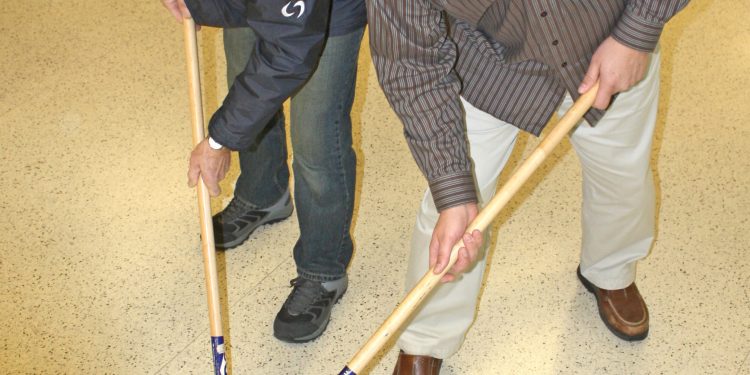 A meeting is being held on Monday, November 25th at the Benson Centre to begin the process of reviving the sport of broomball in Cornwall.

The meeting will begin at 7 pm in the MacEwen Room and organizers will use the meeting to begin laying the groundwork for the development of an adult broomball league next season. All interested players, coaches and organizers (male and female) are welcome to attend.

Broomball player and chief organizer Eric MacDonald said he is looking to connect with potential organizers who would be willing to assist with forming teams and building a league schedule.

“The interest in the sport is there, it’s just a case of pulling it all together,” said Mr. MacDonald, who currently plays with the Maxville Predators.

The idea is to form an adult league featuring several different divisions, with games being played out of the Benson Centre. To support the revival of the sport in Cornwall, the City’s Recreation Department is planning to roll out a 6-week ‘Introduction to Broomball’ program for children in late winter or early spring.

“Broomball is an exciting and affordable sport to get involved in, and we’re looking forward to adding it to the list of sports that are played at the Benson Centre,” said Lorne Taillon, Leisure Arts Coordinator.

Broomball has a long history in Cornwall. In the 1980s, for example, the Cornwall Regional Broomball Association operated an adult league with numerous teams competing in the Elite, Intermediate and Junior divisions. In addition to that, a separate industrial league was in existence while a third league was in operation in nearby Long Sault. The sport continues to enjoy a strong foothold in many parts of Eastern Ontario, including a number of communities in Stormont, Dundas and Glengarry.

At present, there is a group of broomball players who gather informally on Friday nights at the Benson Centre to play. Through the upcoming meeting, Mr. MacDonald is hoping to take that to the next level.

“We’re asking everyone who is interested to come out and help us get the ball rolling,” he added.

Those who are interested but unable to attend the meeting can call Mr. MacDonald at (613) 936-2299 for additional information.