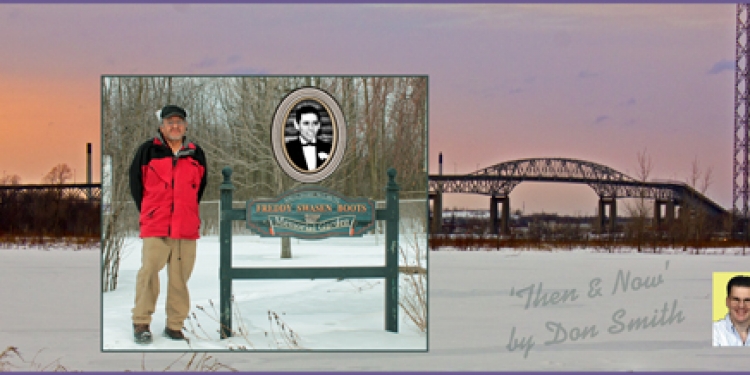 With the current transition from the high-level to the much shorter low-level north channel bridge, it’s timely to reflect on some of the relevant and lesser-known history. Isn’t it amazing how we can pass by something time and again and either be oblivious to it or not appreciate the object for what it is? Since May of 2000, anyone crossing the local Three Nations Bridge has passed by a memorial garden in honour of a member of the Akwesasne community. The garden with signage, plant life and a large rock faces the main road just south of the former Cornwall Island toll booth and administration building and is shown in the accompanying photo. Another memorial is located at the Mohawk International Raceway in Frogtown NY.

Frederick G. (Swasen) Boots, on September 27 1967, at the age of 20, fell some 75 feet to his death while on a pole, painting a section of the five year old north channel bridge linking Cornwall to Cornwall Island. After a wake in the family home, Boots was interred at St. Regis Cemetery. A painter by trade, Boots was also a popular lacrosse champion. Although it was not widely known, the young man was making plans to marry. Boots hailed from a family of 21 siblings, including half-brother Peter Mitchell.

His eldest brother John, pictured above, recalls how the rope connected to Freddy’s safety harness frayed from the inside out, failing to break his fall and how the ensuing meagre cash settlement paid for a rear addition to the small parental home next to his on Recreation Road, in which their sister Susie resides today. He reminiscences of their father’s store near the main crossroads, which today is a burned out single storey version of a once two storey building. Their father, Mike, would cut hair as well. It was a gathering place of sorts. People would play cards and make carpooling plans for residents who sought employment as iron workers at the missile base near Boston and elsewhere. John also confessed his fear of heights, telling me that it’s a myth that Natives have no such fear, simply that they had a harder time in securing “off-rez” employment, so were willing to face those fears in order to support themselves and their families.

At their sister Gloria’s home, directly across from their father’s former store, she poured over some old photo albums while John and I looked through one of her lacrosse books which featured a few family members.

Susie has a photo from a wedding at which Freddy was the best man. As I was leaving her home, she looked me in the eye and shared: “Not one day goes by that I don’t think of my brother.”

Freddy’s was the first fatality since the bridge opened on July 3, 1962. However, his was not the only work-related tragedy that bridge has witnessed. The Massena Observer, the Fort Covington Sun and the Kingston (NY) Daily Freeman reported that, on August 11 of 1961 during the bridge’s construction, Hull resident 20 year old Marcel Labonte fell 138 feet to his death while installing a handrail on a section of the bridge on the south bank of the canal. The tragedy took place as his father and two brothers, also bridge construction workers, looked on in horror. Two years prior Labonte lost a brother in a similar accident.

From time to time a story surfaces in which a member of the Akwesasne community apparently fell into a freshly poured concrete bridge column and is entombed there to this day. It would seem that two or more news reports have become consolidated in the collective consciousness. There are accounts of workers falling into molten concrete and becoming entombed there as massive dams were under construction. John recalls five or six such apparent tragedies during the construction of the Moses-Saunders hydro dam, including that of Billy Mitchell. Thus far, my trusted fellow researcher, John B., and I have not been able to document those tragedies, but I can conceive of how a bridge tragedy and a dam tragedy during the same massive Seaway project could become merged into one vague memory.

Author Stephen Doheny-Farina in The Grid and the Village: Losing Electricity, Finding Community, Surviving Disaster, reports: “a Toronto paper noted that while a total of forty-two workers on both sides of the border lost their lives during the [Seaway] construction, this number compared favourably with the average of sixty construction deaths each in the building of the Panama Canal, Golden Gate Bridge, Hoover Dam, and Empire State Building.”

In an article by Claire Puccia Parham, the author wrote: “Among the most tragic results were the deaths and injury of dozens of men from falls, electrocutions, drownings and the improper use of unfamiliar equipment.”

Thirty-three Mohawks died in the collapse of the Kahnawake Bridge in 1907, one of the worst construction failures of all time. Some of them are related to the Boots family. Members of that family are anticipated to be among the ‘Skywalkers’ to demolish our old high-level bridge.

Understandably, loved ones are never forgotten, yet it’s also a real sign of hope to see that those left behind continue to find pleasure and even humour in life’s events. John and his wife Harriet recalled how, at their wedding almost 50 years ago, the priest stopped mid-Mass in fits of laughter as it struck him funny that a fellow named Boots was marrying a woman named Foote. The couple also shared how the entire extended family gets together for reunions which include some 250 grandchildren.