A labour of love – Cast and Crew of Les Miserables

by SeekersAdmin
in News and Announcements
Reading Time: 4 mins read
26 1 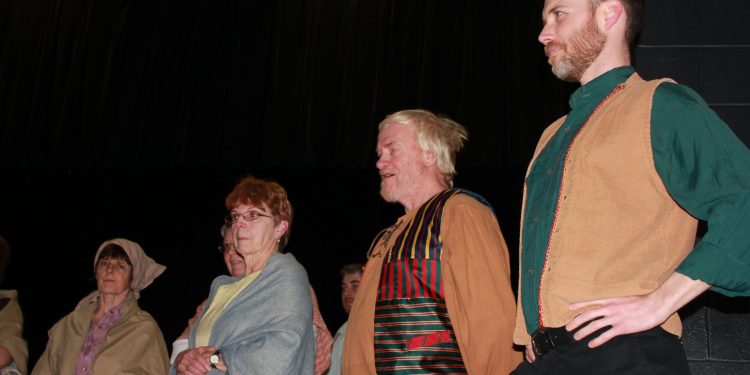 “Theatre is a family, because when you’re on stage it’s a lot of trust, everyone counts on each other just like a family does, so we have a special place in our hearts for our theatre family.”  (Cathy Durham, director of upcoming play Moon over Buffalo)

There is a special bond between the actors that flourish as they work together. Working on a project with  family members, like a presentation or production, can only bring everyone closer together.  In the cast and crew of Les Miserables.  there are a number of family groupings.  Some are husbands and wives, others are mothers and daughters.  Two biological sisters actually have a fight scene together and their mother, Durham, said it reminded her of their childhood.  But the whole cast and crew feel as though it’s a family in itself.

The cast is made out of 56 performers, an even split between male and female who range from 10 to 70 years old.  With only a handful of leading roles to fill, it was hard to chose amongst the many talents who are part of the choir.  However, everyone seems happy with the role they landed.  One of the female performers who place a factory worker said that she got exactly the part she wanted.

Some of the cast and crew are returning from previous shows and some are new.  It takes about 150 volunteers to work on the show, on stage and behind the scenes. Many of those people help behind the scenes; poster creator, and distribution, advertisement, interviews, lights, techies, and so many others that aren’t really noticed during presentation. There are also 13 musicians in the pit for this production.

Cast and crew come from all over Cornwall and area, including talent from Bainville, Monkland, Martin town, Ingleside, and Embrum. They travel miles and miles to attend three meetings a week for rehearsal.

Dave Barnes, The director of Les Miserables stated, “it’s been every bit as challenging as expected, I’m delighted with what’s come out, (we are) on track and looking good. Beautiful combination of really lovely melodies and lyrics, and stirring music, and comedy music. The theme is black and dark, we’ve worked really hard to bring in comedy moments and bright moments, to suit a larger audience,” following in the footsteps of others who have presented the show for today’s people. It’s sure to make you laugh, and put you in tears just as it’s meant to do.

The original play was 3 and a half hours long, they’ve shortened it without losing any of the essence of the Les Miserables show. They’ve created some unique scenes, and utilised scenes from the original show.  I was also informed that they’ve changed the end slightly, but Barnes refuses to tell anyone how it was changed, to keep it a surprise.  “It’s very very exciting, in many shows you get excited through the middle, then it’s getting onto the show properly, you can’t lose that with this, (and) the excitement is definitely still there.”

I also interviewed Christiane Taylor and Lise Richer who are the Co-Producers of Les Miserables. Their job is to take care of everything that is not on stage such as the production teams, costumes, props, sounds lights, costume director stage director.

I wanted to further understand how such a big play comes to life. Christiane and Lise explained that first , you apply for the rights for the play which can be denied if another theater company nearby is doing the same production. You also have to buy the rights, which depends your ticket price, set price, where you’re presenting and how many seats there are available.

Once this was cleared, Christiane and Lise approached Barnes to see if he would direct it. “It’s his style of production, we knew he would love this one when we found out the rights were available.”, the ladies told me during our interview together.

I’ll spare you the rest of the details, but after a lot of paperwork, the auditions finally took place.

120 people came to audition.  Auditions were opened to the general public which is why sometimes, they find new talent.  Plus, it’s fair and it’s not always the same people on stage. Even the production team changes.  High school students are welcome to take part and come to learn before they move on to college or university.

Seaway Valley Theater Company has been in existence for 8 years now.  Because they don’t have a formal theater, they book facilities for rehearsing. I met them at CCVS cafeteria where they were rehearsing for this particular venture.   However, the group also works with Dream Builder Studios for smaller shows.