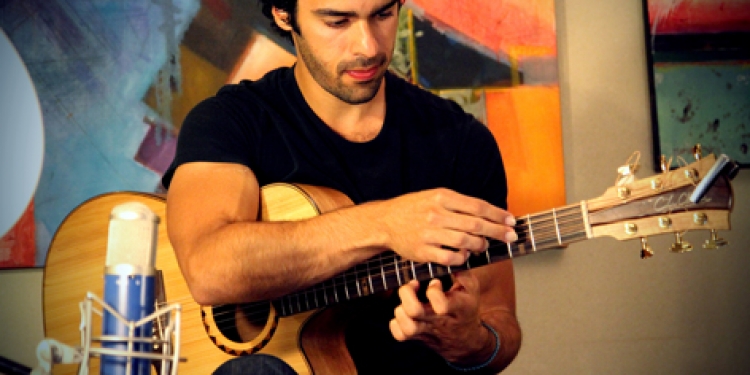 Born in Belarus and of Iranian descent, Maneli Jamal spent his childhood in Cologne Germany, his early teen years in Austin Texas and eventually settled in Toronto with his family in his late teens. He is the winner of the 2010 Taylor Guitars Showdown and placed third in the 2011 International Guitar Idol competition, and with over a million cumulative views on YouTube and a long list of other awards and accolades, he is fast establishing himself as one of Canada’s exceptional young fingerstyle guitarists. Utilizing a mix of classical, flamenco and percussive playing, Maneli composes unique movements far outside the realm of traditional songwriting.“I’m more into letting the music flow as opposed to having a songwriter’s structure, like a traditional pop song would have,” he explains. “I’m trying to gear it more towards how a classical player or a movie composer would create music, which rarely has a structure like that. Its all about visualizing the music.”

With a background that includes having played in a punk band, a metal band along with years of classical training, Maneli toured Australia and New Zealand this past year and is heading to Germany, Switzerland and Italy in April. Raymond Morin writes that “there aren’t many players in this style that have Jamal’s balance of power and sensitivity, nor his breadth of ideas.” We are looking forward to share in a performance experience that Maneli promises is as much a visual one as it is a listening one. Get ready Morrisburg, this is going to be a delight! Visit Maneli’s website here.

Opening for Maneli will be Amy Campbell. Transplanted from the East Coast and now living in Toronto, Amy has been described as possessing one of the ‘sweetest voices on the Canadian music scene’. She brings together classical training and folk sensibilities to create music that reaches into human experience and comes back with stories written from the soul. Her sophomore CD Letters from Home has received rave reviews since its 2012 release, with the UK’s Maverick Magazine describing it as a ‘lyrical masterpiece’. Visit Amy’s website here.

The show starts at 7pm on January 25th 2014. Tickets for this show are $18 in advance or $20 at the door (all tickets general admission). Tickets at Basket Case, Morrisburg and Strung Out Guitars, Cornwall or online via the link below (service charges apply for paypal orders; online orders available only up to day prior to show).