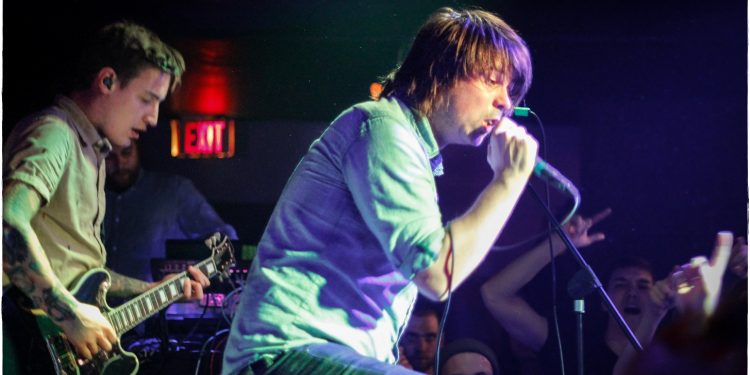 Cornwall Ontario – Silverstein played in front of a full house Friday night at the Vu Night Spot. The emo rock band from Burlington Ontario, formerly on Victory Records, and now represented by Hopeless Records and Universal Music Canada, played an impressive set of melodies in Cornwall. There was a lot of energy in the crowd, and music fans danced and head banged with pleasure. Lead singer Shane Told told the audience, “I’m happy that we finally played Cornwall”. Article and Photos by Jason Setnyk.

One of the opening bands for Silverstein featured Jamie Maracle, who is the manager of Vu Night Spot and the former singer of Fathom Ties. He reunited with the former drummer of Fathom Ties, Daniel Ross, to play a fantastic set Friday night. “The show went really well, it was amazing to see a show sell out so fast in a small town but we did it. Vu Night Spot and myself have been working really hard to have a venue for kids of all ages to come see a great show in Cornwall with acts they enjoy seeing and not having to go an hour away to Ottawa or Montreal for that calibre of show. Silverstein really killed it and enjoyed the venue, even quoting “Why the heck have we not played Cornwall before”, said Maracle.

Opening the concert was Chris Benton with an acoustic set much to the delight of concert goers. There are a lot of talented bands and musicans like Benton that will be hitting the Vu stage soon. According to Maracle, “In February we have some local metal shows. On March 14th, we have a crazy lineup starring “Abandon All Ships” who is touring with “Palisades and Skynet” as well as “Partycat” and Cornwall’s “Here comes Bigfoot”.  On April 15th, we have the amazing “Protest The Hero” touring with the insane “Intervals” and “The Motorleague”.”