by SeekersAdmin
in News and Announcements
Reading Time: 3 mins read
26 2 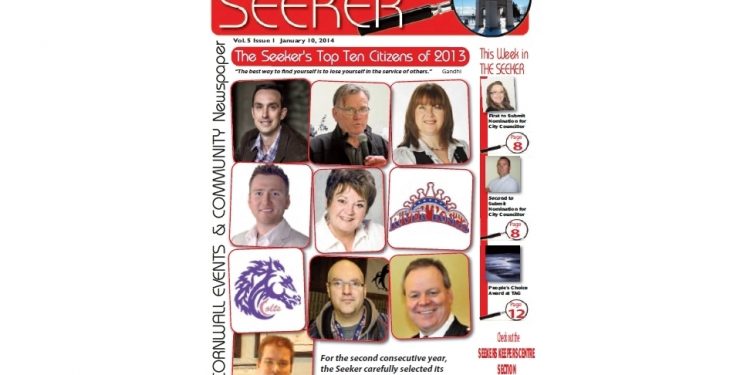 There are a lot of amazing people in our community, and each year we like to acknowledge some of them. Here are the Seeker’s Top Ten Citizens of 2013 plus a few honourable mentions.

NOLAN QUINN who is the owner of Dairy Queen served as the United Way’s Campaign Chair in 2013. The United Way reached its goal of $700,001 with time to spare. The local DQ is also a big supporter of Big Brothers and Big Sisters of Cornwall & District and CHEO.

MARK A MACDONALD is a former politician and a community activist. In 2013 he found his voice on several key issues, and he has become a grass roots leader. Most notably with the closure of the Cornwall General Hospital, he was instrumental in organizing concerned citizens to try and save the hospital for future public benefit and use. Now Mark A MacDonald has been a strong voice in the movement to stop the building of tanks on the City’s water front.

Founder and Past President of the Cornwall Business Network, BROCK FROST is highly involved in the business community and partnered with Candy Pollard from the Cornwall Business Entreprise Centre in 2013 to launch Eagle’s Nest, Cornwall’s own version of the hit show Dragon’s Den. As a graduate of C.C.V.S., Brock also created
The Brock Frost Entrepreneurship Award. This scholarship awards $1000 to the graduating student who possesses the most “entrepreneurial” spirit and ambition.

ROSE DESNOYERS is a painter and art teacher. In 2013 she continues to be active in the art community as President of Focus Art. The organization has held meetings, workshops, classes, and an Art Show at the Cornwall Public Library. Desnoyers continues to be a strong voice for arts and culture in Cornwall and SDSG.

Cornwall Colts coach IAN MACINNIS helped lead his team to the Championship last spring. After making it to the finals the two previous seasons, the Colts finally won the Jr. A championship in 2013. MacInnis was also the coach for Canada East at the Jr. A Hockey Challenge in Nova Scotia this fall.

JASON MITCHELL is a music teacher at Limelight Music Academy, Chair of the Storm Realty Cornwall Winterfest Carnaval, and in 2013 he was the Entertainment Director of Kinsmen Cornwall Liftoff. Mitchell has been making waves in the Cornwall music scene, and he was instrumental in having more local bands play Lift-Off this year than
ever before.

Staff Sergeant BRIAN SNYDER was appointed to the Order of Merit of the Police Forces in 2013. The ceremony was hosted a. Rideau Hall in Ottawa, by His Excellency the Right Honourable David Johnston, Governor General of Canada. Staff Sergeant Snyder was 1 of only 47 appointments from across Canada.

DR. PAUL POIRIER has been dealing with brain cancer since 1995 and has made an inspirational movie “A Test of a Man” which is his story and shows how the human spirit can overcome. As he says, “It aint over til it’s over”. Despite his illness and the many seizures that he is enduring he still remains positive and annually heads the Bikers Against Brain Cancer motorcycle ride which he founded to raise money for brain cancer research.

SYLVIE THIBERT aka the Health Nut had a huge year in 2013. She organized the very successful Healthy Living Wellness Fair and she opened up a store called the Health Nut.

DENNIS LABBE is the president of Cornwall’s Friends of Veterans. 2013 was an important year for the organization. The film release of Breaking the Silence as well as a dinner with World War Two Veteran Len Hart made it a remarkable year for Labbe and for the Friends of Veterans association.

CONGRATULATIONS TO YOU ALL!