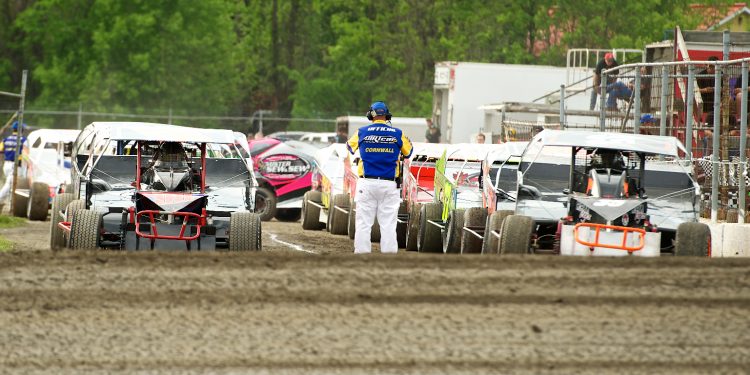 Cornwall, Ont – Sunday, May 25, 2014 – Martin Bélanger – The Cornwall Motor Speedway presented a full show for all 5 divisions as the fans had the chance to meet and greet with their favourite driver at intermission time on Vertical Equipment night.

The Jiffy Auto Service Modified feature saw a pair of #66 on the front row as Kyle Dingwall took the early lead over Carey Terrance. Dingwall led the first 11 laps as Terrance was able to pass him using a lap car to his advantage as Brian McDonald was watching in third. The first caution came at halfway point. On the restart Terrance stayed first as Bruno Lepage had issues with his car on the following lap. Terrance jumped to the front when the green lights were back on and build him a sizeable lead. Terrance led the final portion to get his first victory of the season over Dingwall, McDonald, Gage Morin and Stéphane Lafrance completed the top 5.

Rosco Garreau was the early leader in the Alexandria Home Hardware Pro-Stock feature. Garreau led the way for the first 3 laps as Roch Aubin was able to pass him as Jocelyn Roy was running hard in third. Roy got to second as Aubin pulled away as they reached the halfway point. Aubin is still the leader over Roy and Dave Bissonnette now in third with 5 laps to go. Aubin won the event of Roy and Bissonnette.

Jasmine David and Billy Cook led the field of 22 Sportsmans for the 20-lap Tracy Wheeler Storm Realty feature. Thomas Cook jumped to the lead from his third starting spot as David spun in turn 3 slowing the field down. Cook to the lead as Dillon Sallows is running second with Joey Ladouceur behind him. A great battle for third as Corey Wheeler took that spot on lap 7. Last week`s winner Shane Pecore made his way to the top 5 as the halfway point as Ladouceur battle back to third and quickly passed Sallows for second, Pecore followed Ladouceur`s path in third. Cook had company in front as Ladouceur was on his backbumper as David Andre slowed in the back shoot. Cook was able to resist challenges from Ladouceur to win his first of his career in the Sportsman ranks.

The 12-lap Mini-Stock Feature saw Francis Desjardins take the lead over Marc Chartrand and Sylvain Frenette. Desjardins led the first half of the feature as he got passed by Francis Blanchette who took the lead on the restart; Blanchette led the remainder of the race to capture his first feature of the year over Desjardins and Jean-Francois Page.

Next week, Sportsman and Pro-Stock drivers will have an important night as the DIRTcar Series will be in town for both divisions with 50-lap events as the other classes will have a regular show.

For more information on the upcoming season at Cornwall, please visit the website at www.cornwallspeedway.com you can add us on Facebook at www.facebook.com/cornwallspeedway or on twitter at @cornwalspeedway, we will use these two Medias for results and contests over the summer.