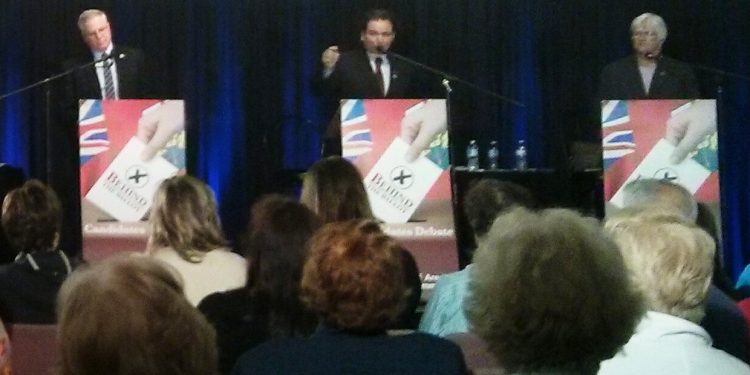 A  crowd of approximately 120 people gathered Thursday night at the Cornwall Civic Complex for the candidates debate organized by the chamber of commerce.

Jim McDonell’s opening statement focused on job loss. Shawn McRae talked about his upbringing. John Earle addressed people both in French and English. “I want businesses to grow, students to get good paying jobs… Our premier has a plan for this province and I am happy to be part of that plan.” Elaine MacDonald also addressed the public in both French and English. “Consider our economy. We know it’s stalled” MacDonald said asking people for their votes. “ We know there is work to be done to turn this province around, but we’re commited to do it… We will respect your tax dollars”

On the topic of reducing taxes, MacDonald says there will be no reducing of taxes under an NDP Governemnt. “Reducing taxes doesn’t work. We will however respect your taxes… Taxes are the price of a civilized society.” McDonell disagreed. “We have to bring back government under control.” McRae followed, “we will reduce taxes by removing government”.

The College of trade, poverty, health care, high costs of energy, the creation of a university, the minimum wage were some of the topics on the table.

At the time of going to press, there was no clear winner in the debate, although McDonell and MacDonald seemed to stand out. Stay tuned for more updates at theseeker.ca