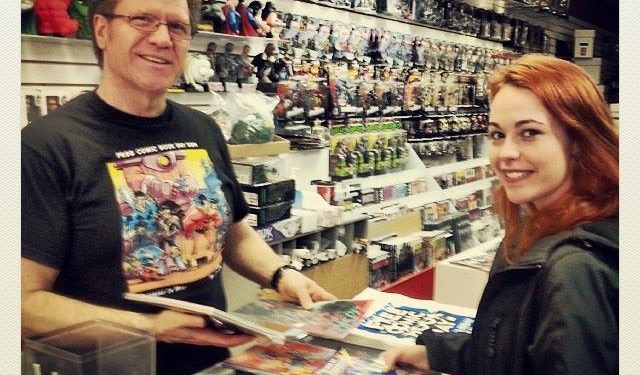 Cornnwall Ontario — Saturday May 3rd 2014 marked Free Comic Book Day. Fantasy Realm, owned by Randy Sauve in in Cornwall, was one of many shops across North America celebrating this special occasion.

There were line ups on Pitt Street to enter the downtown comic book shop.

“Free Comic Book Day 2014 was the busiest and most attended event ever for Fantasy Realm. This was the first time in 30 years of business that there was an actual line of people waiting to get in, and that line lasted for over 3 hours. The city of Cornwall really knows how to support local business”, says Sauve.

Some in attendance came dressed as their favourite comic book heroes.

“Comic book day is not only a day where adults and children can share a common interest. It is all about getting together, reading and enjoying something that makes us all feel like kids again”, said comic book enthusiast Jenn Gravel.

Many parents brought their children to this event.

“It was great to see the line up out the door, not only for the free Comics books but to celebrate Fantasy Realms 30th year. It was wonderful to see my sons face light up just like mine did when I was his age”, said local photographer and father Jason McNamara.

“I love days like today. I’ve been a comic book geek since I was a kid and I’ve been buying my comics at Fantasy Realm since it opened its doors. It’s a lot of fun and I get to raise a few dollars for a great charity while I hang out with my fellow comic book nerds”, says Burelle.