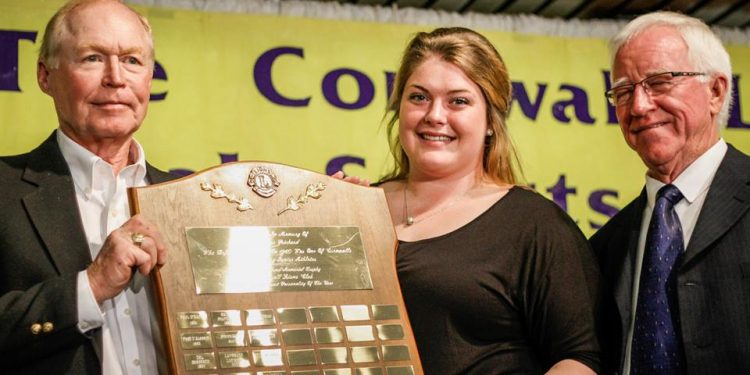 Cornwall Ontario — Over 200 people were in attendance for the 50th Benson Cornwall Lions Club Sports Awards Dinner on Wednesday May 14th at the Civic Complex. There were many special guest including keynote guest speaker and former NHL star Marty McSorley. He is most famous for being Wayne Gretzky’s body guard on the ice. Former NHL goalie and Hockey Hall of Famer Billy Smith, Olympic Bobsleigh champion Cody Sorensen, and CFL Hall of Famer Moe Racine were signing autographs before the dinner. The MC for the evening was Cornwall City Councillor and sports personality David Murphy. Also in attendance was MPP Jim McDonell, Counties Mayor Eric Duncan, Acting Mayor for the City of Cornwall Glen Grant, and a handful of other City Councillors.

The winner of the Jacques Richard Award for Top Sports Personality went to Kelly McGillis. “I was extremely thankful for being able to receive the award and that my hard work was being noticed and paying off. It means a lot to me because I have worked very hard and have been through some pretty tough times and my coach always coached me and pushed me even when I was ready to give up”, explains McGillis.

Here are the winners of the most prestigious awards:

Read about all the winners including hockey, other sports, and RBC High School sponsored awards in print. Here are some Seeker Snapshots by Jason Setnyk fro the event:

Next fundraiser by the Centre for the Arts Collective