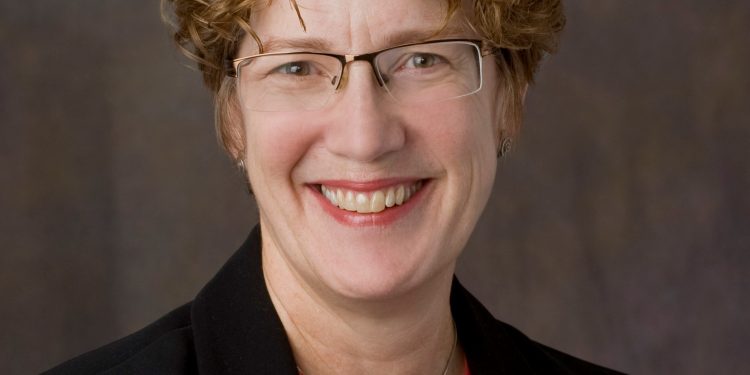 Cornwall, ON – Heather Kembel is no stranger to Cornwall. She is the lead Architect behind the Dominion Place luxury condo project to be built at Pitt and Second in downtown Cornwall. She was also the lead Architect for the much talked about new Central Public School a block away. We caught up with Heather in her Kingston office earlier today to ask her a few questions…

Q: Some people here call it a school inside a school… how did the preservation of the heritage façade at the new Central Public School come about?

(Kembel)… The ‘school inside a school’ concept was prompted by three principal factors.

This site has been home to a school for two hundred years, playing an important role in the community.

A common tenant of heritage preservation is to try to preserve existing structures ‘in situ’, rather than moving or re-locating them.  For both heritage and cost reasons, it was therefore preferable to maintain the existing entrance façade in its original location.

The original Central Public School was set fairly far back from Second Street, which created a grand front entrance, but devoted much of the site to ornamental front yard space.  With the expansion of the school, it was important to maximize play space away from the street, which prompted us to bring the face of the building closer to Second Street.

Positioning the heritage façade at the interior corridor line of the building further protected the deteriorating brick, permitting us to restore the façade without concern for further exposure to the elements.

The placement of the façade as a backdrop in the library, one of the more ‘public’ spaces in the building, further provides both physical and visual access to the public, who can see the original façade through the large windows facing the street.  It also provides a physical connection to the history of the school for all of the children to enjoy.

Q: Now you’re once again reunited with Bourgon Construction, back for another major development at Cornwall’s cross roads downtown, tell us more about that project?

(Kembel)… CKA is very pleased to be working with Bourgon Construction again on this project.  This will represent the fifth project we have worked with them on, and they bring a commitment to quality, attention to detail, and customer satisfaction to each of their projects.

In designing Dominion Place, we were very cognizant of the importance of this site in central Cornwall.  The history of the site and its prominent position demanded a building with presence and distinction; a building which will be referenced as a landmark in the city.

It was important that the building display a level of detail and elegance appealing to the discerning home-owner.

In addition to working closely with Chris Markell of Bourgon Construction, we have worked very collaboratively with Ron Chenier and Dick Markell, partners in the project, to ensure that the design is a good fit for the City of Cornwall, providing an exclusive and unique luxury condo suite experience, otherwise unavailable in the community.