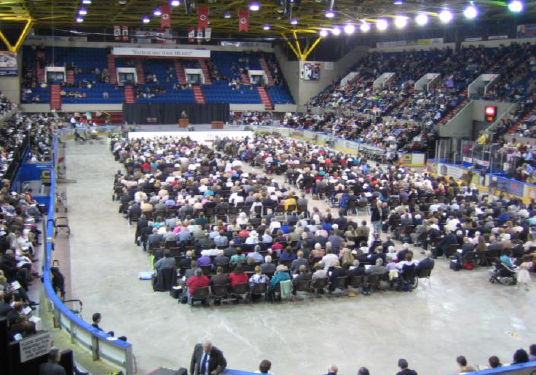 Thousands of Jehovah’s Witnesses start converging in Cornwall on Friday, June 13th for the first of three Watch Tower conventions being held at the Cornwall Civic Complex in the Ed Lumley Arena.

Altogether more than 10,000 delegates will be attending the three conventions, pumping in excess of $4 million dollars in economic benefits into the community.

“We are delighted to host this important event once again”, said Janice Robinson, Facilities Rental Co-ordinator. “The organizers work very hard each year to put on such a successful convention. We have been so fortunate to work with Watch Tower since 1998, they have truly become a part of our community.”

During the months of June through August, Jehovah’s Witnesses will present 55 convention programs in 25 locations across the country. This year’s convention theme is “Keep Seeking First God’s Kingdom,” based on Jesus words at Mathew 6:33. Many conventions will host international delegates and missionaries from around the globe. A convention highlight is always the two theatrical productions that bring a Bible story and a modern-day drama to life.

The public is invited to attend any session or the entire program at the Cornwall Civic Complex. There is no admission fee as the Conventions of Jehovah’s Witnesses are supported entirely by voluntary donations.

Lynn Hess, one of the local convention co-ordinators, said programs at the conventions will feature important information for families. “All of us are deeply affected by the events of our time, and we do need guidance.”