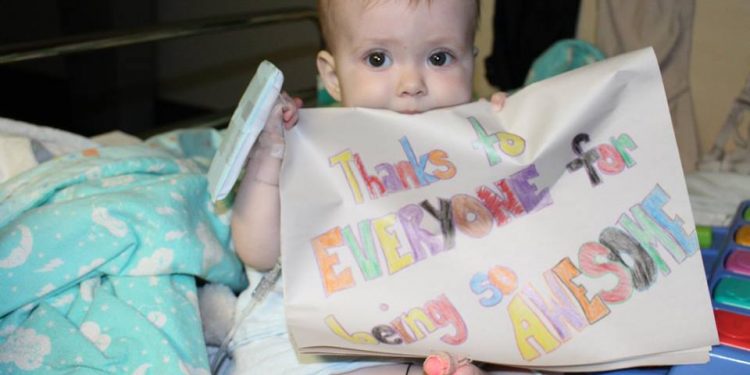 When a Community pulls together…

On April 11th 2014, AnnMarie Wheeler and her family went to CHEO anticipating a normal ultrasound for their daughter, Eleanor (also known as Epic E).  They anticipated a clean bill of health and wanted to get home in time for their older daughter, Ruby’s, 4th birthday party.  Unfortunately, the ultrasound was abnormal and little Eleaonor was admitted immediately.  The Doré/Wheeler’s world was turned upside down.

After numerous xrays, ultrasounds, an MRI, a CT scan, two needle biopsies and an open biopsy, pathologists, radiologists, oncologists and surgeons from Ottawa, Toronto and Texas diagnosed Eleanor with a mesenchymal hamartoma,  a very rare benign tumour that affects only 250 people worldwide.

Eleanor’s first surgery on May 16th removed 85% of the 20cm tumour along with a small part of her liver.  It was considered a success.  Doctors were not able to remove the whole tumour because Eleanor would not have been left with enough liver to survive, but they were confident that they got enough.  After two days in the Paediatric Intensive Care Unit and four days on the surgical floor, the family was able to finally go back home and begin enjoying life together again.

However, on June 17th, the parents had to take Eleanor back to CHEO. Her belly seemed to be growing again.  After more ultrasounds, xrays and CT scans, doctors found out that the tumour was already back to 13cm. The growth was happening at an alarming rate and doctors decided to send Epic E for evaluation in Toronto.  The family was discharged and instructed to await further instructions.

On June 25th, little Eleanor was found having breathing difficulties.  Finding themselves once more at the CHEO emergency department, the family was yet again admitted. After an ultrasound and an xray, it was determined that Epic E’s right lung had collapsed! This meant another small operation to insert a chest tube that would drain the fluid accumulating around her lung. After 6 days with the chest tube in, it came out unintentionally, and they were sent back home but are now back at CHEO: her lung collapsed again.

The family is currently waiting for their consult at Sick Kids Hospital in Toronto.  This will happen on July 16th. They most likely will be transported from CHEO by helicopter to meet with Canada’s top pediatric surgeon. It will be followed by surgery on July 18th to remove three out of the four lobes of Eleanor’s liver and hopefully rid her body of the tumour.

Needless to say that all this traveling and time spent away from work has taken a toll on the parents and this community is pulling together to try and make their life a little easier.

On facebook, people started posting encouraging messages such as “Epic E is my Hero” in to the family’s facebook group.

Business owners, touched by the story, started fundraisers.  Sylvie Thibert, “The Health Nut”, collected ove
“With the love and support, thoughts and prayers and positive vibes from so many wonderful people we have made it this far!”, said AnnMarie,  “We appreciate everything that everyone is doing to help out Epic E and our family! Worr $750 at her store last Saturday and many other business owners are also following suit.
ds cannot express how thankful we are to everyone for all their support.”

The Seeker would like to help Epic E by donating 25% of sales made through our website to the family.  Go to www.theseeker.ca/newsite/epic_e for details

An online fundraiser is simultaneously taking place and has accumulated over $4,000 to date.  You can donate by visiting https://fundrazr.com/campaigns/1oG71/tw/c3ftM0