by SeekersAdmin
in News and Announcements
Reading Time: 3 mins read
25 0 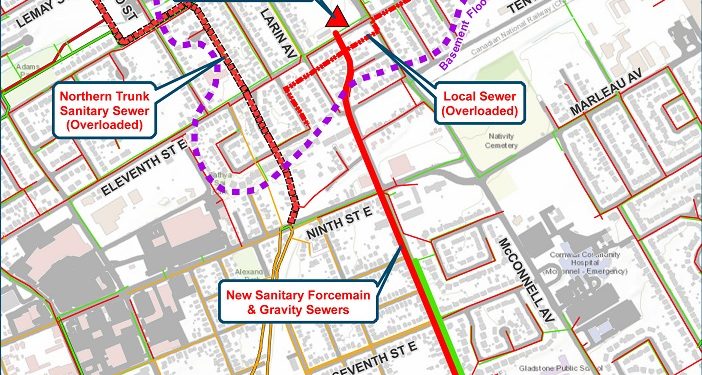 Cornwall Ontario — Work is expected to begin soon on a two-year sewer rehabilitation project in the area of Eleventh Street and Grand and Miron Avenues. At its regular meeting on Monday, July 14th, City Council awarded the contract for the work to Cornwall Gravel Company Ltd. at a cost of approximately $4.3 million. The City has secured a $2 million provincial grant through the Small, Rural and Northern Municipal Infrastructure Fund to partially offset the cost of the project. Slated to extend over the next two years, the project will involve building deeper sewers on Eleventh Street and Grand and Miron Avenues and redirecting sanitary flow to an alternate part of the sewer network where sufficient capacity can be developed. Components of the project include: – Removal of the old Guy Street sewage pumping station. – Construction of a new deeper sanitary sewer on Eleventh Street and parts of Grand Avenue and Miron Avenue. – Construction of a new pumping station at Eleventh and Marlborough Streets with state of the art monitoring and controls, backup power and a new forcemain on Marlborough Street from Sixth Street to Eleventh Street. – Construction of a new storm sewer on Marlborough Street from Second Street to Eighth Street to separate the combined sewer and provide extra capacity. “This is a significant project that will improve the City’s overall sewer and storm sewer capacity and benefit homeowners throughout the community,” said John St. Marseille, General Manager, Infrastructure and Municipal Works. Residents are advised that there will be road closures and detours in place in the area while the work is completed. The initial phase of work is slated to begin by early August in the area of Second and Marlborough Streets and progressing northerly on Marlborough Street. During the work, Marlborough Street will be closed to through traffic with McConnell Avenue serving as the detour. A detailed work schedule will be published on the City website (www.Cornwall.ca) as the project progresses. “This will create some temporary inconveniences for motorists and residents in the area. We appreciate the patience and cooperation of all residents while this work is completed,” said Mr. St. Marseille. The Grand/Miron project is one of several initiatives included in the 2014 Water and Sewer Budget as part of the Cornwall Blueprint, the City’s comprehensive plan to deal with issues such as basement flooding mitigation and environmental, water and infrastructure awareness.