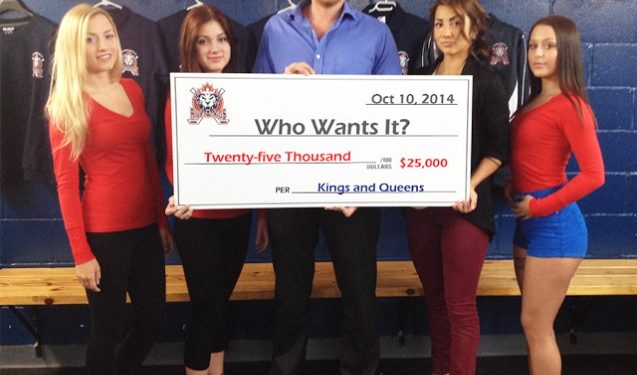 Cornwall Ontario– While River Kings general manager Rick Lalonde and assistant Al Wagar continue to look at ways of improving the product on the ice, owner Brock Frost is focusing on the entertainment factor.

This year, the River Kings will introduce the $25,000 shot. At each home game, tickets will be sold for $5 and one lucky fan will win a chance to shoot for $25,000. The shot will take place from the far blue line and if successful, the lucky fan will earn a cheque for $25,000.

Meanwhile, Frost has secured a deal that will allow the River Queens to sell beer to fans in the stands at the Ed Lumley Arena.

“I am looking to make this year a success,” said Frost. “We are not simply focused on winning hockey games but rather making the entire River Kings experience an event for everyone to enjoy,” he said.

The River Kings are also proud to announce they’ve once again partnered with 101.5 Real Classic Rock, who will have live broadcasts of all road games.

The deal, which includes more than $15,000 in exchange of services, will also include commercials on home game days, partnership and promotions of all River Kings events and on-air giveaways.

“It is impressive what Mr. Frost has done with this team in such a short time,” said Wayne Thompson, account executive at 101.5. “We are truly looking forward to the upcoming season and partnering with the Kings to help make it a huge success.”

Tickets are now on sale for pre-season games as well as the Blue & White game at half the cost of regular season prices. Tickets are $7 for adults and $5 for seniors and students.