by SeekersAdmin
in News and Announcements
Reading Time: 2 mins read
13 0 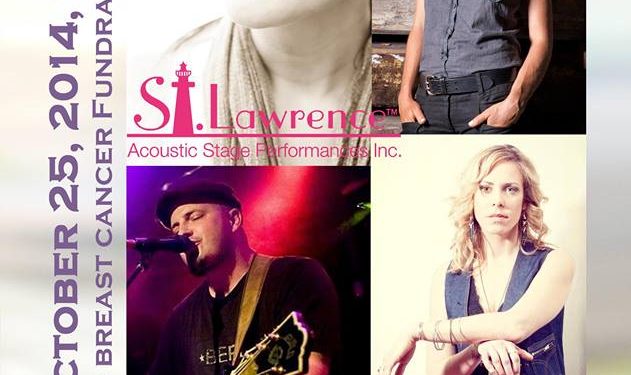 Babes4Breasts (B4B) is a group of like-minded Canadian recording artists who have come together to fight breast cancer through music. Their mission is to use the power of music to raise funds and awareness for breast cancer prevention, education, and support via both conventional and integrative strategies. Every year a different selection of artists performs a fundraising show in Ottawa and together they have raised over $100,000 for breast cancer charities to date.

The headliner is B4B organizer and award-winning singer-songwriter Ana Miura. She’s an international touring artist possessed with intimate, sweet vocals, fluid guitar style, and a light all her own. Ana has performed at Canadian Embassies in Costa Rica, Honduras and Nicaragua and has also been a featured musician for the Embassy of Japan in Ottawa, singing both in English and Japanese. She has toured in Canada and the USA and has shared stages with Sarah Harmer, Broken Social Scene, Bruce Cockburn, Joel Plaskett and Rick Fines. Joining Ana will be B4B co-organizer Amanda Rheaume, as well as Annabelle Chvostek and local fan favourite Graham Greer.

Métis singer-songwriter Amanda Rheaume is a powerful vocalist with just a touch of grit and an instantly-accessible roots-pop-Americana sound. Her 2013 album Keep a Fire, was Juno nominated and is a varied and evocative collection of mostly story-songs about her ancestors that more than lives up to the tradition of epic family-of-origin albums. She’ll be joining B4B in Morrisburg after a month-long Fall tour to Europe and the UK.

Annabelle Chvostek is a former member of the Wailin Jennys who graced our Stage several years ago just prior to the release of her most recent CD, Rise which went on to be nominated for both a Juno and Canadian Music Award in 2013. “The Wailin’ Jennys’ loss is the world’s gain”, declared the Saskatoon Star Phoenix, adding, “her original compositions are full of aching desire dressed in poetry and rendered with a musical imagination that seems to know no bounds”.

Graham Greer – because guys can be babes too! He’s visited the Stage twice before and this Montreal-born and longtime Cornwall native is the former frontman of the hugely popular 1990s band Barstool Prophets. A solo artist now for over a decade, with occasional reprise shows with the Prophets to keep things interesting, Graham is an award-winning singer-songwriter who moves from folk-rock to ballads with ease and is always a favourite at the St. Lawrence Stage. Holding everyone together and keeping them to time will be Steph McAlear on percussion – Steph is originally from Cornwall and now located in Ottawa, he’s supported past B4B shows in Ottawa as well as numerous musicians here at our Stage.

Come out for a great night of music with these five fabulous babes and lend your support to a very important cause!

Tickets for this show are $18 in advance or $20 at the door (all tickets general admission). Tickets at Basket Case, Morrisburg, Strung Out Guitars, or online via the link below (service charges apply for paypal orders; online orders available only up to day prior to show).