The Changing Face of Downtown Cornwall 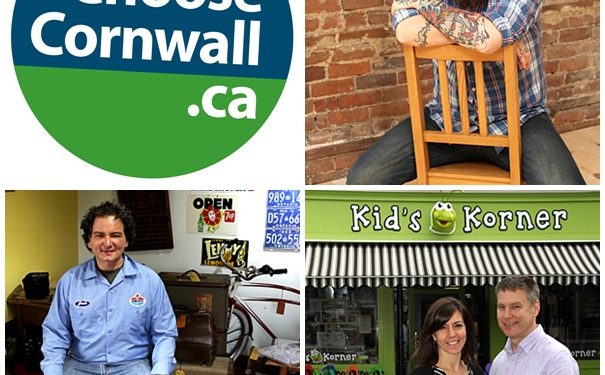 John Earle has opened a new store in Downtown Cornwall. Earles’ Vintage + Design is located at 103/4 Fourth Street East and is open on Saturdays. John Earle has had a passion for antiques for over 3 decades. One day many years ago, his father brought home an old telephone, and 6-year old lad was hooked. “Over the years my interest expanded into other antiques and heritage,” says Mr. Earle, a well-known local filmmaker. “I would pick up items as I came across them, and recently it occurred to me that my collection was perhaps a bit large.” One of the most striking pieces for sale at Earles’ Vintage + Design is a bench made from a piece of a wooden keel. Mr. Earle has since refinished it into a unique piece of furniture.

Photographer Jason McNamara is setting up a studio in a heritage building in Downtown Cornwall in space above Pure Esthetics at 137 Pitt Street. “Having a studio will allow me to take my business to the next level,” says Mr. McNamara. “Downtown Cornwall has an exciting vibe to it, and I look forward to adding to it.” The 800 sq.ft. of studio space will allow Mr. McNamara to under take more commercial and portrait photography. The self-taught photographer has been amassing lighting equipment for some time now and creating a home base will allow him to be more efficient and increase his output. “Getting the right image is all about the combination of subject, setting and light,” says Mr. McNamara. “A studio gives the photographer more control over each element.” The studio will also be a place for Mr. McNamara to edit his photographs, and increasingly, his video projects.

Cornwall’s downtown is a little bit brighter these days following improvements to the area’s favourite toy store, Kid’s Korner. The iconic retailer has a bright new green face with matching awning and a whimsical sign featuring the store’s new mascot, a caterpillar. Kid’s Korner is owned by Kevin and Leslie Ouderkirk and is housed in a two storey-brick building on Pitt Street. The couple knew that they would have to make sure that the improvements were respectful of the heritage nature of the building. “Pitt Street has really come alive with new stores and businesses, and we wanted to be sure to preserve the ‘Main Street’ feel of our building,” says Kevin. “At the same time, we are a toy store, and it was important to add a little bit of fun into the design.” The Ouderkirks turned to local master signmaker Noella Cotnam and Sign-It Signs to come up with a unique store marquee. “The caterpillar is a fun character with a friendly green face and large eyes. The 3D nature of the sign makes the character come alive and it was a lot of fun to create,” says Noella Cotnam.  The revitalization of Kid’s Korner was supported by the City of Cornwall’s Heart of the City Community Improvement Plan which has been established to assist property owners revitalize properties within the City’s core.

Library debate brings arts and culture to the forefront